I tried to take the weekend off knitting, because my hand was bothering me, and met with iffy success on the project. To feel like I was doing SOMETHING, I felted all the containers I'd knit recently: 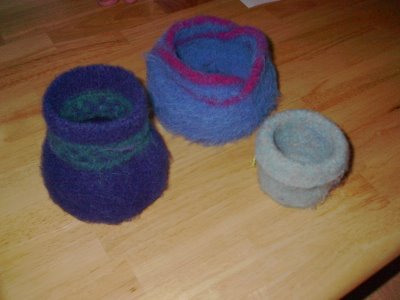 By the way, if you ever felt Uros Aran, it sheds like CRAZY. Like little drifts of blue fuzz all over the floor crazy. If you're using a washing machine, stop the cycle before it pumps the water out and swish your arm through and pull out any clumps of fiber you can feel. (Some people use a hand-held kitchen strainer to do this, but it's more trouble than it's worth to me.) Loose fibers can clog the pump and kill your washer. That's bad. If you do a rinse cycle, stop it and do another fiber grab for any more that came loose. But I can't think of a better yarn for felted children's toys, it comes out almost like fur.

If you're doing something like this, same yarn, different containers and patterns and with the final intention of making up some of your own (I've got an experimental on the needles right now), you can do this on the first one: 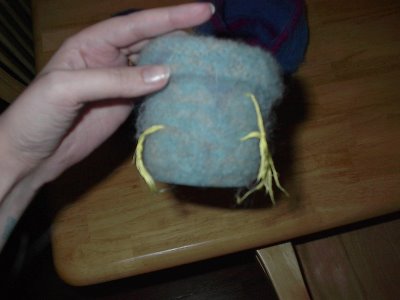 Those little yellow bits are cotton yarn I tied there BEFORE felting, ten stitches wide and ten rows high. That way I have a fairly accurate gauge idea for anything new I want to knit. However, everything felts a little differently, even the same yarn knit with a different pattern or into a different shape. But at least this way you have a ballpark guess.

Yesterday I also dyed yarn. This was experimental stuff to try some new techniques before I dug into the sock yarn I ordered. The skein of autumn colors turned out fairly nice, but the purple one was a disaster. (I'm calling the color scheme "Purple Train Wreck" and have no intention of repeating it.) I'll take photos of them once they're dry and I've skeined them up properly.

I've identified the problem with purple food coloring. (If you read blogs or articles where people dye with food coloring, there are often comments about purple acting strangely, and it is usually blamed on the vinegar. It's not the vinegar.) The blue and red chemicals that make up the purple food coloring 'take up' (stick to the yarn) at dramatically different speeds, so what really happens is your yarn turns pink and the blue runs off. Yesterday I tried several things, including adding more blue. I'll call it a mixed success. I got a couple shades of purple that don't make me gag, including a nice dark grape shade, but all of them will be hard to repeat on purpose. For the next experiment I'm going to try a two-part process with actual pink and blue and see how THAT works.

Then, this morning, I got twelve skeins of sock yarn and four skeins of laceweight in the mail. I'm heavily drugged and I'm wondering if I can skein the stuff without screwing it all up. But at any rate, the laceweight is 100% merino and REALLY nice. I'm thinking of keeping some of it. (We knew this would happen, didn't we?)

Oh, and just so you know, if the baby falls into the bathtub, don't laugh at her while you pick her up. It pisses her off. Even if she DID look like Chevy Chase doing a Gerald Ford imitation. (There was no water in it and I was right there. She was WAY more angry and surprised, than hurt.)

OMG--you really did skin the cookie monster and make it into a pot! (Seriously--they turned out great! I'm getting very into felted pots--they look tres kewl...) So--do you have an explanation for why green dye (of any sort) is so much stiffer than almost any other color? Just wondering...

The only thing I've been able to find on the subject is that green is often a two-part dye process, even in these modern days when most other colors are done with just one pass. So maybe more color means stiffer yarn?

I love the pueblo pot

I so want to make pots! What a great stash busting exercise! I have loads of 8ply Bendigo Woollen Mills stuff left over from other projects (those big 200g balls always leave extras) and I reckon it'd felt perfectly.

Cookie Monster. *snigger* Good thing the baby isn't old enough to get that yet. She might be really upset!

Are you going to make a mobius cat bet for Sekhmet now? I LOVED the ones in 2nd Treasury of Magical Knitting. I wish I could have a cat just so I could knit her mobius beds!
All the pots are lovely.

wendy over at wendyknits.net has a pattern for a cat bed too - free pattern, i don't think it is a mobius bed though.

I loved the cat bed as well. As I have 4 cats, I've been planning to make these. I just don't like the felting process-I get involved in doing other things and forget about the washing machine (just a little ADD)
Aven

I just put my washing machine on heavy duty for as long as the cycle allows, hot wash, and small load. Let it run and let the wool tufts fall where they may.

Of course last year I made a purse that could have been used for body armor, by that method.

Love the Pueblo pot. I felt things in a lingerie bag in the washer to cut down on the amount of free-floating fuzz. The last time I did this the excess built up in the corners of the bag and I was able to harvest little coins of felt. No idea what I'll do with them yet.