'Cause, really, what other option is there?

I've been dicking with my medication again. A year and a half ago, I got put on Cymbalta, which is an anti-depressant sort of drug developed for chronic pain folks. (Those of you who aren't interested in health shit, I get that. Scroll down. There won't be a test later.) Anti-depressants are kind of a damned if you do, damned if you don't solution to pain; they work better than a lot of other options, but they still suck. (I ranted about the whole thing here, on a blog post entitled "Fucking Happy Pill Shit", which tells you what you need to know.)

Anyway. A year and a half ago, the doc put me on this drug. It gives me what I call "nap attacks" - I will fall asleep almost like I pass out, for two or three hours. When I first started it, one memorable evening I fell asleep on the living room floor with the Goober's beanbag chair as a pillow. When I mentioned this to the doc, she told me to keep at it, because it would go away. HAH. Guess again.

After a year and a half of trying to time the nap attack at bed time, by moving the time I take the pill, I am done. DONE. Fuck this. Next appointment, we are going back to a different drug I've taken in the past. OR ELSE.

Or else I will take a nap on the counter of the nursing station. That'll show her.

Still knitting on the sleeves. I was going to make the bell sleeves bigger, but after reading the comments on my last post, reason set in. I'll be keeping them as they are.

I will do a blog post on different sleeve types, but ultimately, in the EPS system, so long as you're at your 40% number when you get to the armpit, you can do anything you want, short of knitting a Volkswagen.

So, I've got this little netbook I roam around the house with. Usually I keep an electrical socket open in all my favorite spots, and plug in as I roam. I've even got a spot on the back porch. Lately I've noticed the plug felt funny as I moved around, but didn't pay much attention. (See drug commentary above.) It worked, so who cared?

Yesterday I sat down at the kitchen table, went to plug in my netbook, and there was this hunk of metal sticking out of the hole for the ground plug. Huh. Then I looked at the plug itself. 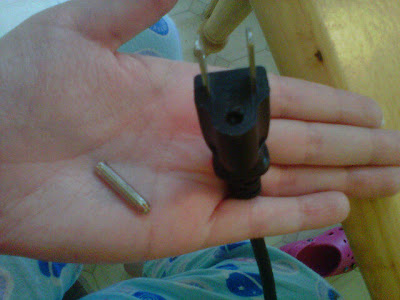 I used pliers to pull the prong out. It was the ground, so I didn't have to shut off power to the entire freakin' house while I did it. I used insulated pliers, anyway.

Fortunately (sort of), I had saved the cord from the netbook I killed the winter before last, so I switched them around and all is well. But damn, that was weird.
at 9:45 AM 11 comments:

It's the big problem with EPS and coloring outside the lines, and doing whatever you want. Deciding what in hell you really want to do.

I sat down and started knitting edging for my sleeves. That was kinda nice. 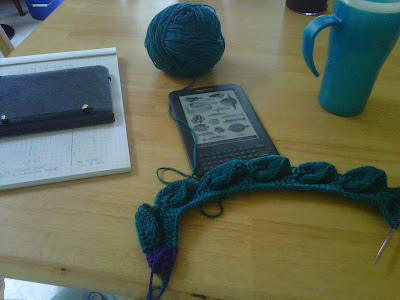 Reading, knitting, if it hadn't been for Cartoon Network in the other room, it would have been perfect. (It also would have been nice outside, but the weather has sucked. SUCKED!)

After about eight repeats, I hung it over my wrist to get the feel for it. 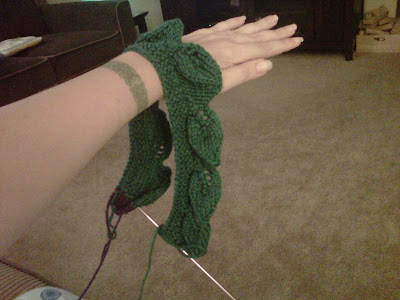 I want bell sleeves. But how belled?

We had a fun weekend here. The in-laws visited. My mother-in-law had her knee replaced about a month ago. She's doing great, but things have been rather catch-as-they-can at their house. So they came over, I cooked a lot of food, made ice cream, and other goodies. We sat around and watched movies and vegetated.

I have a confession. Last week, in kind of a fugue state, kinda stressed out, without enough sleep, I was at the book store. And, well, this is what I bought. 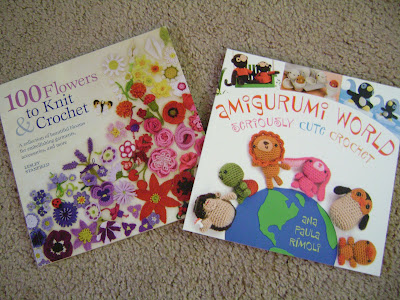 The directions kind of made sense. I thought maybe... maybe this time it will make sense.

Then I hit the yarn store. 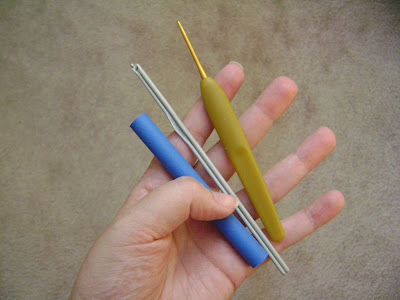 I've got about ten miles of crochet cotton around here, so, you know...

If it rains blood and plagues of frogs and locusts show up, I HAD NOTHING TO DO WITH IT.

(For newcomers, I have nothing against crochet. I suck at it.)

Remember Tour De Fleece? I'm trying to do it this year.

Unfortunately, I went off spinning this winter in the midst of all that PT and whining (hey, idea for a new blog, "PT and Whining"). So my goal for the Tour is to just get my ass in gear again. I have to build up slowly because of my hand problems, and on day one I could only spin for half an hour. Really annoying.

The other night I finished this: 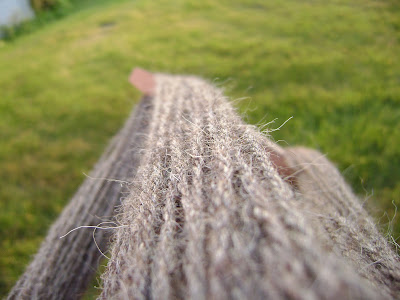 It's Gotland wool, which is sort of like Shetland. Spun to about worsted weight, triple ply.

It's the worst spinning I've ever done since I learned to spin. Breathtakingly awful. The single broke three times while I was plying the damn stuff. Ugh.

The one nice thing has been the weather. I spent last weekend spinning out on the back porch. We had a couple days of super hot weather, but a cold front went through, and I'm hoping for more porch spinning this week.

The Goobie likes it too. 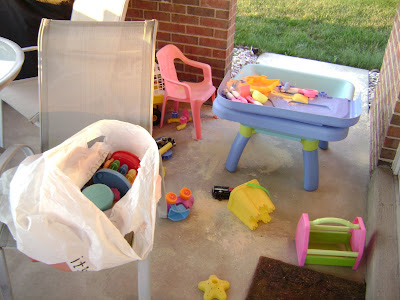 All right. You've knit the body up to the arm pits, right? Set it aside. That's right, take a deep breath, set it aside as is. Hug it first if you want to. Get yourself some DPNs or a shorter circular needle, or whatever you need to knit cuffs, and get ready for the next.

Let's take a look at our handy schematic again, hmmm? 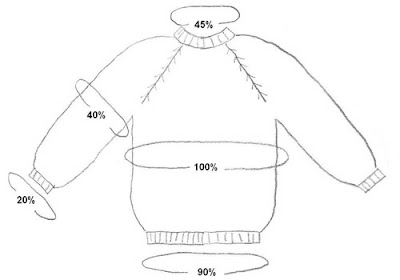 You need to cast on 20% of your stitches for the cuff.

If you're knitting a generic pullover, make the cuff match the ribbing you already knit at the waist; use whatever needle you used before, and whatever ribbing. If you knit a hem for the waist of your sweater and have no other plan, ribbing is a good way to go for the sleeve cuff. Use a needle one or two sizes smaller than the main body is being knit on (makes the ribbing stretchier) and knit a couple inches' worth. Consider a tubular cast-on and a 1x1 rib.

Once the ribbing is knit, switch to stockinette stitch, the needles you used for the body, and knit three rounds plain. On the fourth round, mark a column of stitches to function as the underarm stitch. Increase one stitch on each side of the underarm stitch. I use the make one (backward loop) increase method.

Then, knit another one.

To avoid the cliche of sleeves two different lengths, the best and easiest way is to make sure you've got the same number of rounds/rows in each sleeve. I do it by tying string into the first sleeve, every twenty rounds. Then I knit the second.

Next up? Coloring outside the lines, on the sleeve cuffs.
at 8:22 PM 5 comments:

Some friends and I have been talking about where we draw the line on a pattern, you know, whether we'll knit it or not. It was hinted that my line is in the road in front of the funny farm, but we all have them. Here are some of mine:

-Lace short rows. There's no fucking way. Nothing in the world is cool enough to struggled through that. (Though I've done stranded colored short rows, and it was easier than I expected... hmmmm.)

-Charts. If it's complicated, I want a chart. Doesn't matter if it's color, lace, or texture. I want to know where I'm going and where I've been.

-Lots of seaming. This one's more of a grey area, but I feel that if I wanted to sew, I'd sew. I want to knit, not sew crap up. So the more seamless, the better.

Uh. Sadly, I think that's it. I'll wrestle almost anything else if I want it badly enough.

Thanks to the glory of Benadryl, well, hell, how in fuck did it get to be July? I would have sworn it was mid-June.

Even the Tour de France/Tour de Fleece kicking off didn't register with me. I just sat in front of the wheel like a zombie and did some spinning. 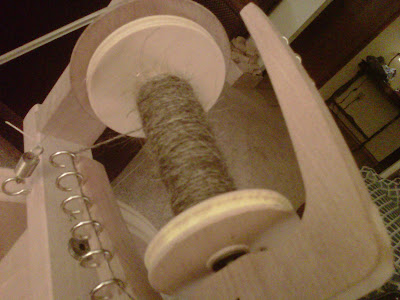 This is Gotland wool. In top form. 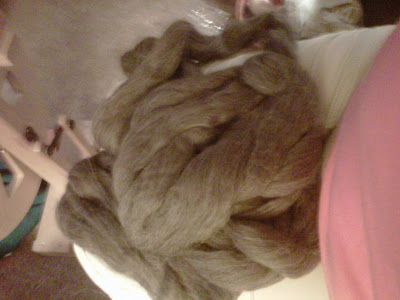 It's in that crack between brown and gray; natural color. With top, you lose a lot of characteristics of the fiber in the processing. It's coarser than merino (big duh) and has some kind of crimp going on that makes it tricky to draft.

What finally snapped me out of the antihistimine haze is my Jeep. 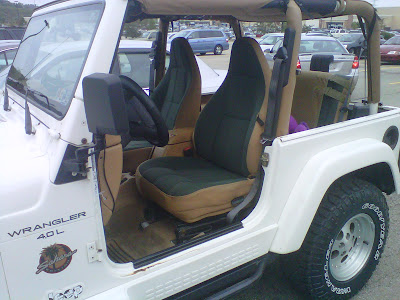 We took off the doors and switched tops around, and it's ALMOST as good as a motorcycle; you can smell and feel where you are, just like when you're riding. But it's a darn sight safer. And can haul groceries. And has a radio.

I drove around like a maniac for most of the early afternoon, grinning stupidly and sliding around graveled corners on back roads. We're very near a lot of farms and have great back roads for this sort of thing. At one point I passed my neighbor; he was riding a four-wheeler like a bat out of hell, and I was going the other way in the Jeep. Like a bat out of hell. We waved and grinned like maniacs.


With luck, the adrenaline and the massive amounts of sinus medicine I've been taking will kick in, and I will become coherent. Well. More coherent.