One of my favorite not-precious gemstones is in the news! The Obamas gave Queen Elizabeth a brooch made out of this stuff, and she wore it to do meet-and-greets on the day That President arrived in the UK to play golf and shake hands.

Pictures of the brooch are absolutely terrible. And that's too bad, because moss agate is pretty.

Agate, for you not-rock people, is a term that means "some kinda colored quartz that is distinctive enough I can give it a specific name and charge more for it". Moss agate looks like there's stuff growing in it. Dendritic agate is moss agate that looks like trees. Crazy Lace, Plume, Iris, there are dozens. It's all plain old quartz, with some kind of mineral added for color, and then crystallized in different ways. Some of the weirder colors are rare, but quartz itself is all over the place. (Sort of like you find beach glass everywhere, but not red. Oh - and a lot of that beach glass is quartz. So is the sand.)

It so happens moss agate is one of my favorites, so I wandered through House O Samurai and picked up some likely bits and went out to take some photos on the back porch. (New people: This is known to happen. Rocks are cool.)

Here you are. Moss agate. 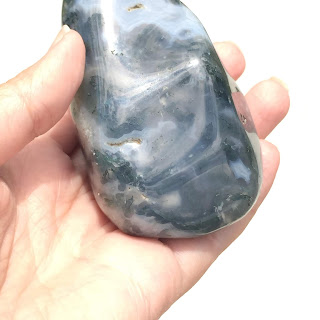 The pic is over-exposed because I was trying to show the depth. This is a chunk of not-good rock, run through a rough polish. It's not gem-quality or anything. But if you look at it closely you can see there are layers and layers of clear, translucent, and opaque quartz laid over each other.

Here's what's known as a 'landscape agate' that you can more clearly see the clear and opaque effect (image ganked off Pinterest): 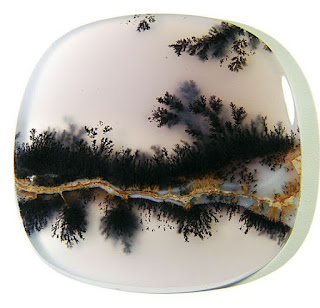 Because it's so common, you can get bits of it for Not Much and that's why I have some of it. I've got shallow pockets. But the forms of quartz are almost infinite, and neat to look at.

Here's some 'moss' in my chunk of rock: 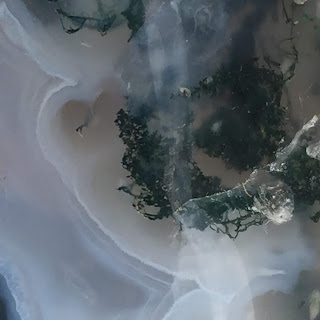 You can see the cracks and stuff, not good for gem quality. But you put a flashlight under this sucker and stare into it? You can meditate for DAYS. Even without chemical assistance.

Since it's easy to get, neat to look at, and comes in big hunks, it's inevitable that people carve it. Here's a tiny little bowl I have, that I bought because it's alllllmost got a picture in it. (You can sort of see a bird in the upper left, sun in the upper center, and a tree or three in the lower right.) 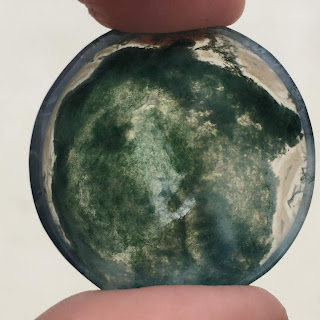 My finger and thumb included for scale; most of those picture agates you see on the internet aren't large. (Very cool. But not that big.)

So for moss agate in the news. The Obamas gave the Queen of England a moss agate brooch on their last state visit to the UK. Pictures of it have been terrible. But what it looks like? 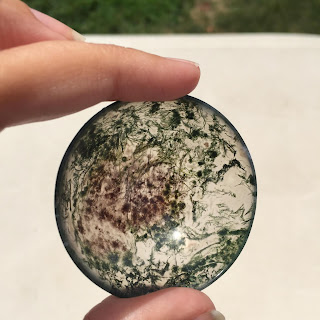 This is another of my moss agate bowls. the upper right of it, in this photo, is the highest quality part of it. I think the brooch is five flower-petals made out of that, with a little knot of diamonds in the center and a gold stem behind. That's what I'm getting from the really blurry photos and 'moss agate'.

Maybe I'll talk rocks some more, NEXT time something laying around my house is in the news.
at 1:46 PM 3 comments: