Or maybe the other way 'round. We could use the joy of creating as a definition of what makes us human. Anyway, since my archeology rant, I've been thinking about it, and as far back as I've ever gotten in my study of history, I can think of things people did, that seem to be for no other reason than the joy of creation. This is still expressed by modern craftspeople in such a basic form they don't even think about it: "Might as well make it pretty/attractive/nice." or conversely, "No sense making it ugly." But the bottom line is, why not? Why not make it ugly? If we're making things for form and function, who cares what it looks like?

I have heard the above from craftspeople of all stripes (it has been my great luck to be raised by people hellbent on educating me - does it show? - which in part meant being hauled around to every historic site within driving distance, many of them offering living history exhibits; you may have noticed I'm curious about everything). Glassblowers, blacksmiths, potters, stonemasons, gardeners. Every last one of them has expressed a variant of "might as well make it look nice while I'm at it". It does not appear to be a new idea within the human race. It does appear to be so hard-wired into the brain that people don't even pause to think about it. If you're going to make something, invest time in it, you're going to do it well.

For the purpose of this discussion, I narrowed myself down to one craft: pottery. Mostly because it's durable and lasts nearly forever, even if you drop it. So it's easy to find photo examples. Now, there are two ways to decorate ceramics; surface texture (scratching, stamping, etc) and 'painting' or application of surface color by zillions of methods. I've been thinking on this for three days, and the only PRACTICAL uses I can think of for either one of those decorative methods is, to mark each pot as different, so that you know what's in each one, you know, 'the one with the red stripe has beans, the one with no stripe holds rice' - though this could be done just as easily by making the pots themselves different shapes. Surface texture could make the pot easier to hang on to, giving your hands something to grasp, although in most early pottery (and a good bit of the later stuff) the clay itself was rough enough that it didn't really need extra help. But look at the history of pottery, and what do you see? Humans unable to leave something the hell alone without decorating it. The more I research, the more I think humans, given enough time, will decorate anything if it's not red hot or nailed down.

The oldest known pottery IN THE WORLD is Jomon Ware from Japan. It dates to something insane like seven, eight thousand years ago (this date, like many others, is under quite a lot of hostile disagreement). It is unglazed. However. 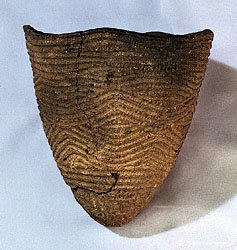 Jomon means something like 'cord-patterned' in Japanese. See the surface texture? Okay, you could argue that it makes the pot easier to hang on to. But why the wave pattern, reflected in the top edge? Why spend the extra time laying out something symmetrical and patterned like that when some irregular scratches would work just as well? Because it looks cool, that's why. Jomon Ware eventually evolved into this: 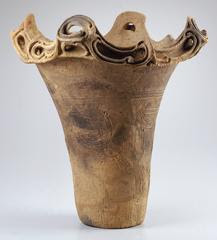 No practical purpose for that swirly stuff around the edge that I can possibly think of. In fact, I suspect it would make the thing almost impossible to pour from and hard to move around since it's likely top heavy. But it looks fucking cool, now, doesn't it? Gonna tell me it has a ritual purpose? Maybe, if they want to make offerings to the gods that LOOK REALLY FUCKING COOL. (That's another thing these 'it's a ritual object' people overlook; even if it is a ritual object, why invest so much time in it?)

There's no way it could have been some single idea that everyone copied, either. Because while the Jomon were making their crazyass ruffle pots (my term, don't try to look up 'ruffle pots' on line, the gods know what you'll find), over in the Middle East, at Catal Hyuk, one of the world's first cities, they were making THIS. (This stuff is dated to almost the same time as the early Jomon Ware. In some ivory towers there are fist fights over who was first.) 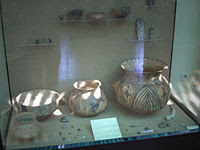 And at about the same time in Turkey, they were making this: 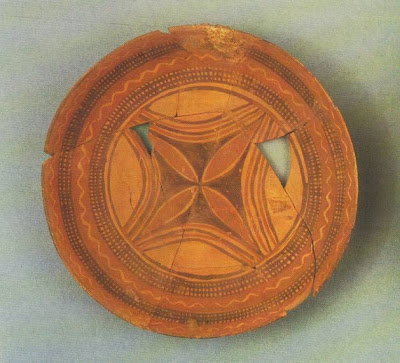 There's no practical purpose for putting all the time and care required into these pots. Not for the decoration. Anthropologists would probably go off on some riff about status symbols. I say, bullshit to that. People made them because they loved to create. And there was no sense making them ugly. Maybe they became status symbols LATER, but the reason they existed was because you might as well make it look nice.

No matter where or when you turn in the world, there was someone happily putting awesome-looking decoration of no intrinsic value on pottery of all kinds. Here's a few favorites: (please note dates for a lot of this stuff is contested, so I kept the dates very general; if a notation said from 3000 to 5000 BCE, I just went with 4000.) 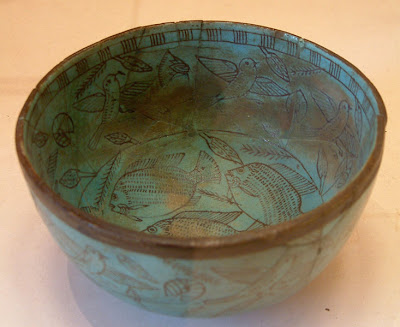 Dating of this piece is iffy, but it's probably four thousand years old. Ish.


China, from six thousand years ago: 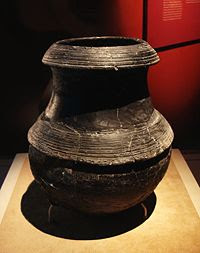 To the neolithic era about four thousand years ago: 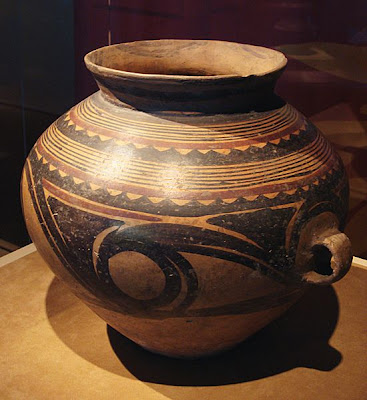 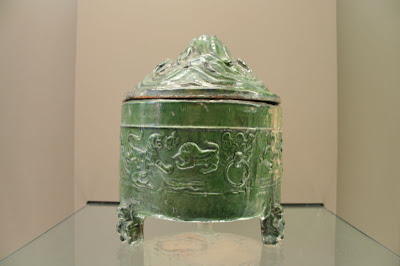 To the insane stuff made during the Ming Dynasty for export to those Europeans with the unsubtle tastes: 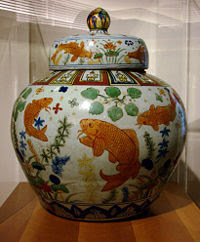 The Minoans were making 'marine ware' painted with pictures of sea creatures, from 1500 BCE; this one seems to be pictures of cuttlefish. 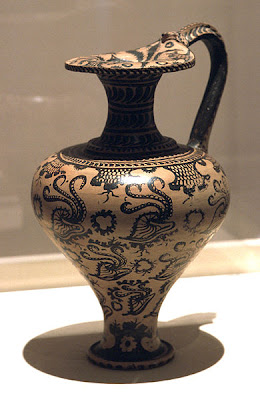 I could go on. I will if you really want me to. But it's easy to see. Years, centuries of man-hours, spent decorating pottery (and this is just the pottery! think of the clothes, the wooden utensils, the weapons, the - the-) for no good reason. None of this makes the pottery more useful. Some of it makes it less. Yet obviously, all over the world, humans have always had a need to make stuff, and to make it well. Pride in their craft? Sheer joy at making it? Act of devotion to their craft, their gods, their tribes? Who knows. But it makes me proud to be in such august company.

"Because it looks fucking cool!"

Plain socks with ribbing to hold them up are serviceable. But the patterns and the yarns? They're to make them look good. That urge to make something look pleasing to the eye? Priceless. I envy the people who have the vision to make the pleasing shapes and colors. I want to do it but my brain and my hands don't always play well together.

I agree, I think every human is creative. Even the people who mumble, "I'm not very creative," if you look at their lives, their creativity is showing somewhere. Maybe they fix old cars or arrange the flowers they pick in their gardens, but whatever it is, it almost always shows up somewhere.

To me, it's when people get totally cut off from their own creativity that their lives start getting more and more messed up.

I'm not expressing what I mean very well, dang it.

Oh...the design on that Turkish thingy looks like it could be a mean spindle whorl.

This is something that archeologists tend to leave out - because it looks nice or it's prettier like this is obviously not something they consider. Daft.

I think it's true across human history (and maybe in some animals, too) that kids take stuff apart and grown-ups put stuff together. When we go camping and are left with free time on our hands (and no tv) the first thing my 4-year old wants to do is get a big stick and whack it into pieces. My husband, on the other hand, wants to take a whole bunch of big sticks and build "something." It might not be all that decorative to me, but sometimes beauty is (only) in the eye of the beholder.