The foundation of civilization.

I actually had this thought about a week ago, mentally kind of noted it down as a good blog post topic on a day when I have nothing to talk about, and took a photo, knowing eventually I'd stall and need a topic. Today's the day. Here's your photo. 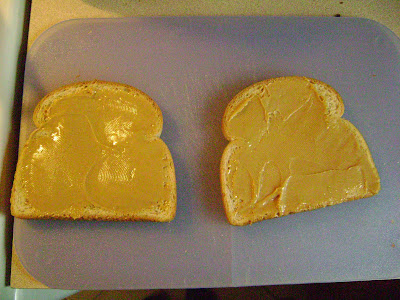 You're looking at it and thinking, 'is that PEANUT BUTTER?' and you're right, it is. Peanut butter on whole wheat toast. Looks like a snack, right? Sure. It's also what built civilization as we know it.

Waaaaay back in the neolithic, we started farming. (We as the human race, of course.) Mostly I suspect that we started off with hard-to-find plants that were hard to gather, and THEN moved on to food crops. But when we did start cultivating food crops, we went with whatever was easiest to grow and most nutritious (though I'm sure that's not how the neolithic farmers would have phrased it, but they understood the concepts). Yield per acre was also a big factor.

Inevitably, no matter where it was in the world, the human race settled on a combination of two families of plants: Grasses and beans. (Poaceae/graminae and fabaceae/leguminosae, if you wanna be a botanist about it.) Always. Every last one of the early civilizations used a combination of grain and beans. In the Middle East, it was wheat and barley for the grain and peas, beans, and chick peas for the beans. China, it was rice and millet for grain and soy beans for the beans. Even central America did it; corn and beans. Sub-Saharan Africa was a latecomer, but used millet and peanuts. Europe used oats, barley, and beans (plus grains and beans imported from the Middle East).

The reason this is the default for agriculture is easy. The two, combined, create a 'full protein', or the whole compliment of amino acids that the body needs to function. Some anthropologists treat the grain and beans combo as interchangeable, but the truth is, not all grains and beans are created equal, and some combinations are better than others for that 'full protein' result. (I once did a research project on this, with charts of amino acids and the works.) According to the research I've done, the best combination is wheat and chick peas. So eat all the whole-wheat pita and hummus that you can hold.

My particular snack of choice has a typically American history. The wheat came with the European settlers, and they got it, originally, in trade all the way from the Middle East (a long, long time ago). The peanuts came with the slaves when millions were stolen from their homes in Africa and brought here. The invention of peanut butter is a hotly debated subject, but most historians these days agree it was not invented by George Washington Carver (though he invented all kinds of other crazy uses for peanuts, including plastics and drugs). It seems that everyone, sooner or later, had the idea to grind up peanuts and use them as a spread or sauce.

Without these 'full proteins' in the diet, mankind would never have had the get-go to build cities, specialize in trades, and generally create what we know as modern civilization.

Odd thing is, yesterday I had this great desire for a peanut butter sandwich - I could imagine it, taste it, see it there on the plate, with some home made strawberry jam. And I have no peanut butter in the house.

Yeah, I've thought of that, eating my PB on WW. And then my eyes wander over to the pantry with its packages of food stuffs, then I start thinking about the grocery store full of food-like substances mainly made up of corn, soy, wheat, sugar, and salt, and I wonder what happened to our innate understanding of nutrition that lead to the discovery all over the planet, by (mostly) illiterate prehistoric peoples, that certain foods in particular combinations make you healthy!? I mean, really, would you have thought to soak your corn in lye to make it digestible?? That stuff will eat your skin off, and you want to soak your food in it????

I just finished a piece of whole wheat toast with peanut butter! I, however, am an extra chunky girl (my pb thank you very much!) and I see you are a smooth person. Since I really like reading your blog and the Goob amuses me I am willing to overlook that.

Beans and grasses create a complete protien and when they're grown together or used in crop rotation they're complimentary to eachother. Beans and legumes being nitrate fixers replenish soil nutrients taken by other crops. Our ancestors were a lot more clever than most modern humans give them credit for.

I never feel guilty about giving my kids pb&j for lunch, because I know it's a complete protein. (Only whole wheat bread here, except for when we buy a loaf of Italian to go with pasta & sauce.) One of my favorite parts of the Pequot Museum, which we visited over the winter, was the exhibit on the domestication of corn. I had limited time to stand and read but it was fascinating.

I'll have to pass this on to my dad--he's been telling me that peanutbutter on wheat bread is the food of the gods since I was a kid!

I love peanut butter (smooth, thank you very much), but I can't eat it when I'm working on anything for my little sister or her daughter, since they are both deathly allergic to all nuts. Really reduces my healthy snack options, so I don't make her nearly as much stuff as I should! and I haven't eaten a nut since the middle of February, between making her birthday sweater and some Easter socks for the both of them. MMmmmm.....peanut butter toast...mmmmmm......

A new book you might find interesting: An Edible History of Humanity, by Tom Standage. Starts with the differences between wild & domesticated food plants & the process of domestication, then food in pre-history, and goes from there up to the so-called "green revolution" (conveniently stopping before the collapse such as is being experienced now in the Punjab as the water table drops lower & lower). I thought of you while reading it.

I will never apologize for loving peanut butter sandwiches again.

I so much enjoy peanut butter on rye toast . . . oh, yummy. Actually, I was at the nutritionist yesterday and she spent quite a bit of time discussing the importance of protein with the appropriate balance of carbohydrates . . . and then she said, "you work in an office and should keep a small jar of peanut butter in your desk. If you discover your proteins are slacking off or are really hungry and need a quick boost, a tablespoon of pb will do the trick." Wise woman.

I am not a peanut butter fan unless it's mixed with butter and sugar and flour and baked into cookies. My dad still loves his peanut butter and jelly sandwiches but on really soft white bread. "pb&j bread" he calls it.