And so, the Goober.

I'll eventually get around to where I've been for the last year (if for no other reason than to document it and hopefully get a few laughs). But it veered mostly between lots of pain and lots of annoyance. I'm trying to decide if I should name names, with the doctors. At the least, I'll get into where you can find the one who called me "sweetie".

But first, some year in review stuff, and of course, the best thing of the year was the kiddo. Because she's awesome. 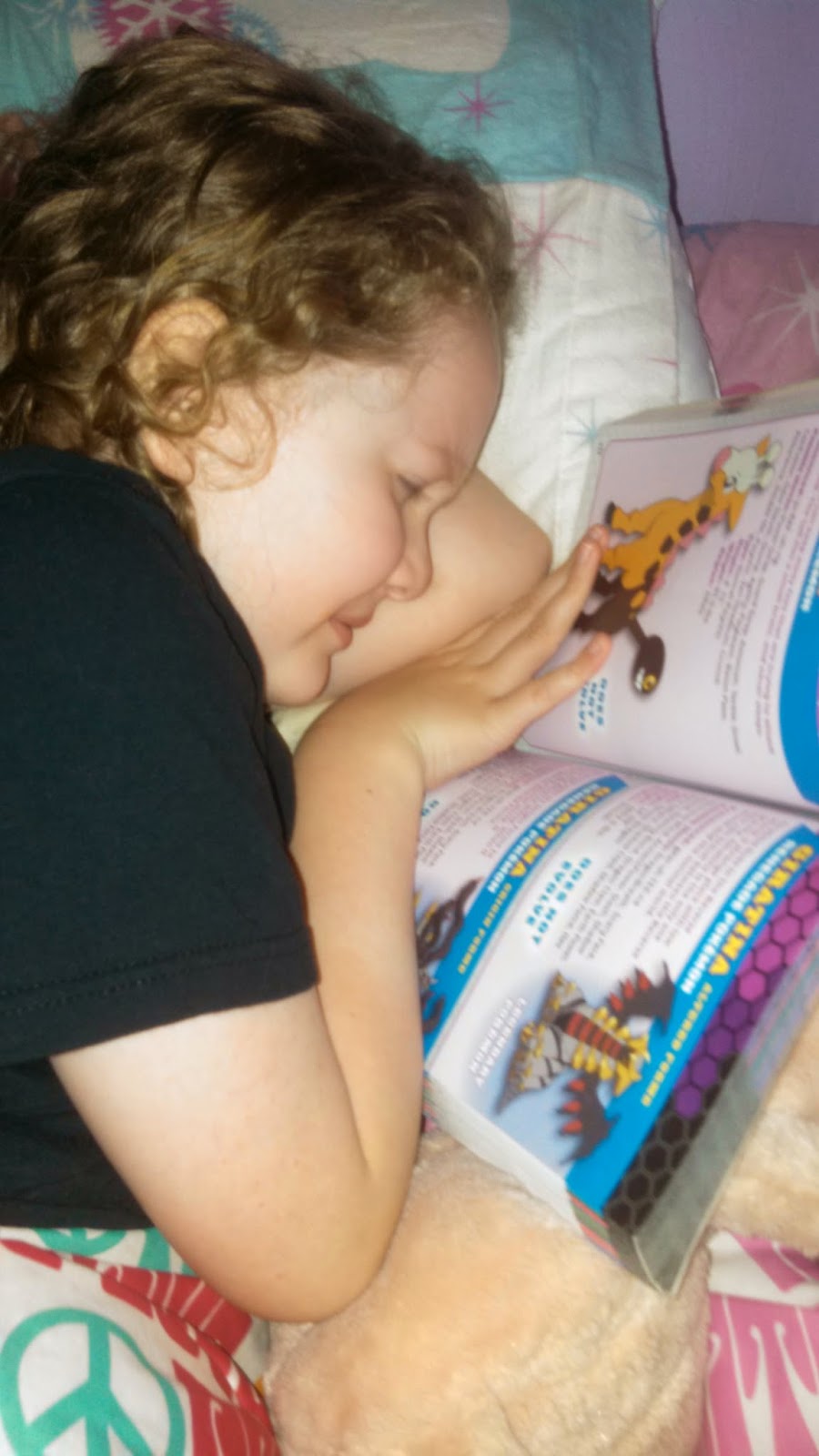 This is the best thing, I think. That's her, face down and asleep with a book. She's started reading voraciously, mostly YA novels. I started the European tradition of letting her open a book gift on Christmas Eve, and allowing her to stay up as late as she liked, reading. Most weekends she'll fall asleep reading in the evenings. It's awesome.

There was a thing I'm having trouble adjusting to, though. 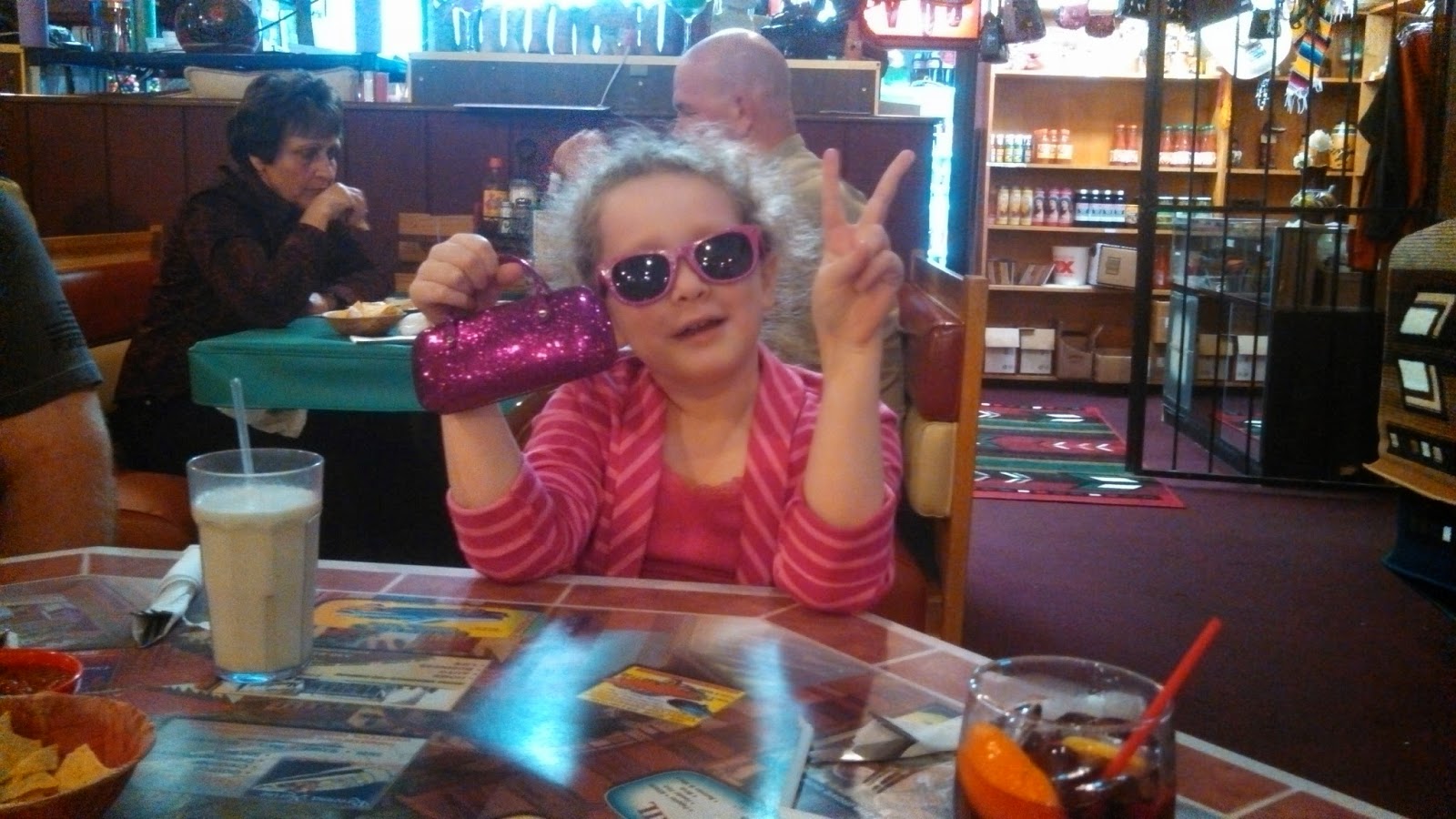 She's got all these OPINIONS all of a sudden. (No, really, it's a hoot.)

She turned nine. After a week of not being able to make up her mind, at the last minute, she asked for the same cake I always make. 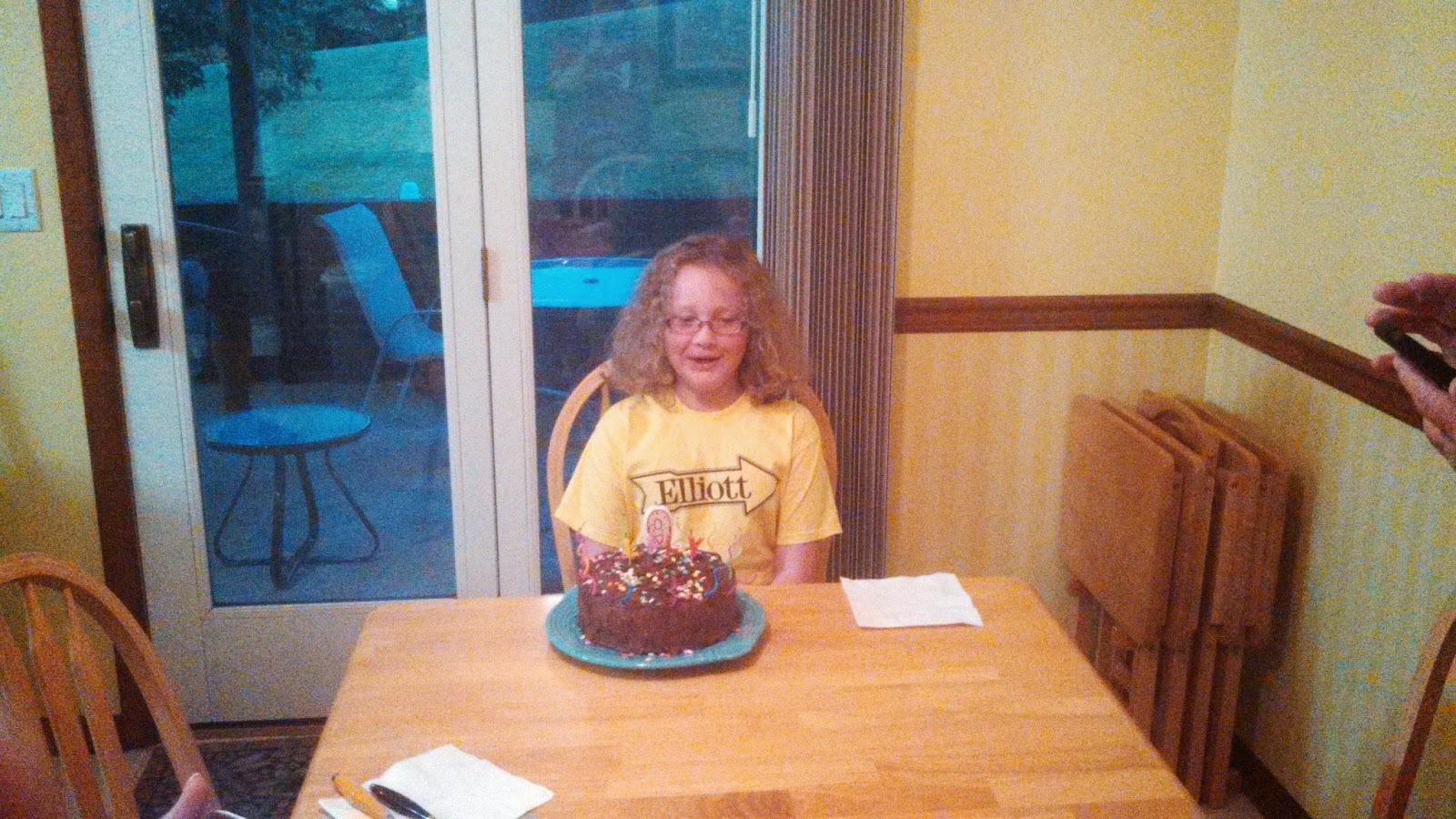 And, big one, SHE IS WEARING MY CLOTHES. 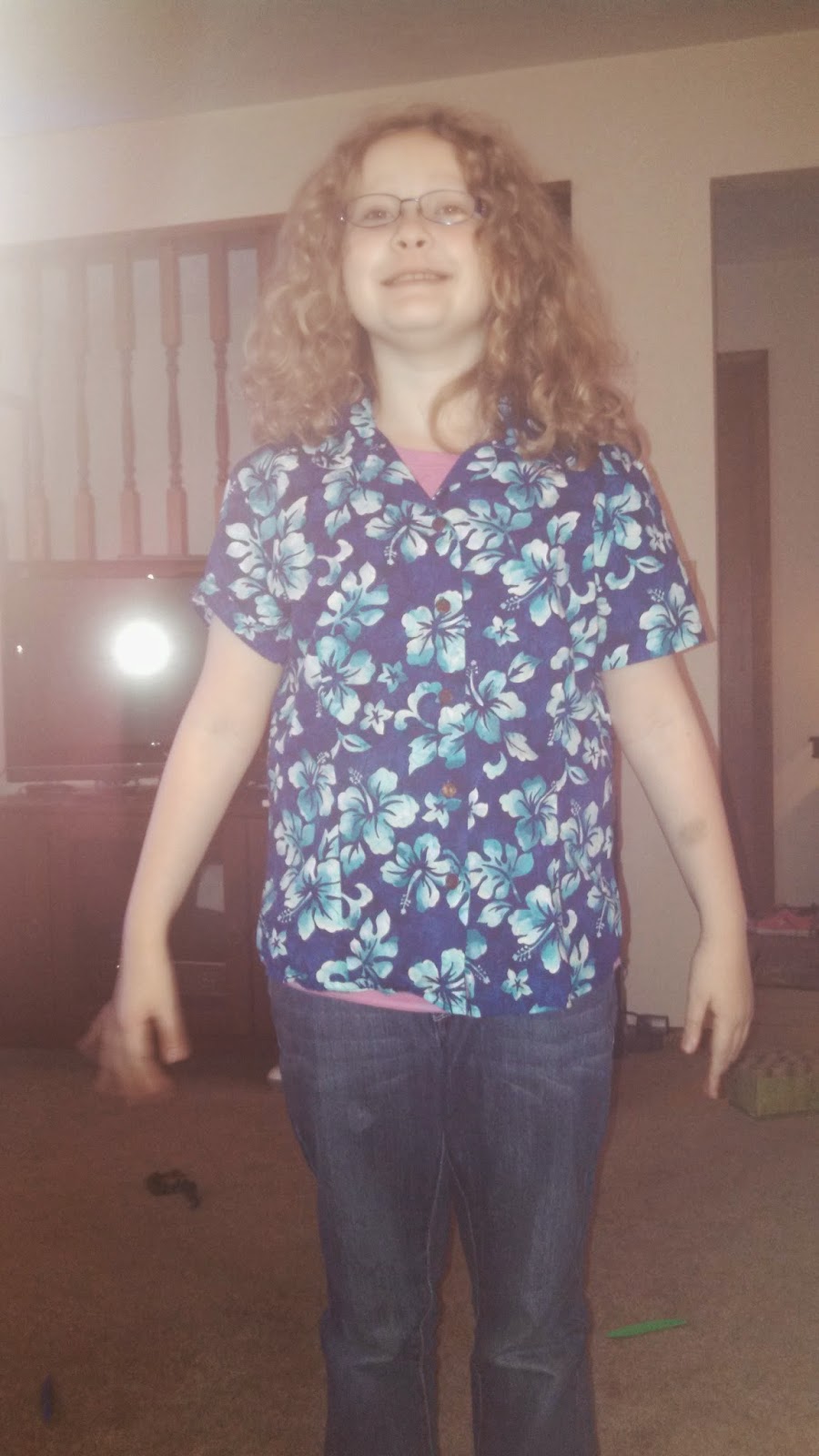 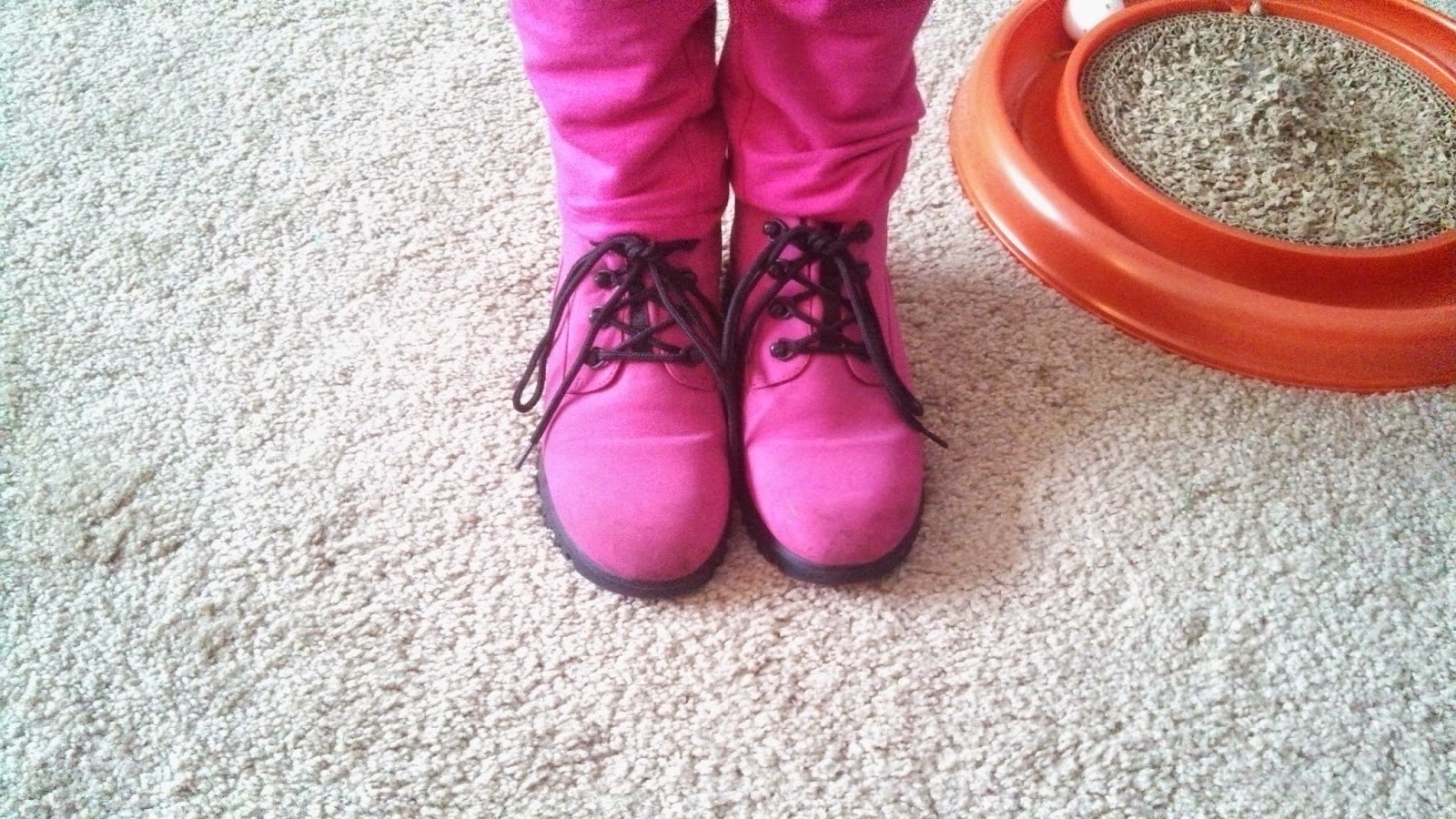 Granted, the shirt is from the Skinny Years, and the boots were tight, but. THOSE ARE MY CLOTHES. How did this happen? (I totally earned Mom Points though, she told me half an hour before the bus that she needed a "Hawaiian shirt" to wear. OH LOOK WHO HAS A COLLECTION.)

She finally learned to swim, thank the gods. And she started piano lessons a couple weeks ago. (Husbeast and I have been debating... is it wrong to push your kid - into band, in our case - when we're pushing them toward something FUN?)

Lately, she's been yelling "MOM, I'M HOME." every afternoon on the front walk before coming inside. I guess so the neighbors know too? Whatever, it's adorable.

Another landmark this year, though not a positive one like the others. 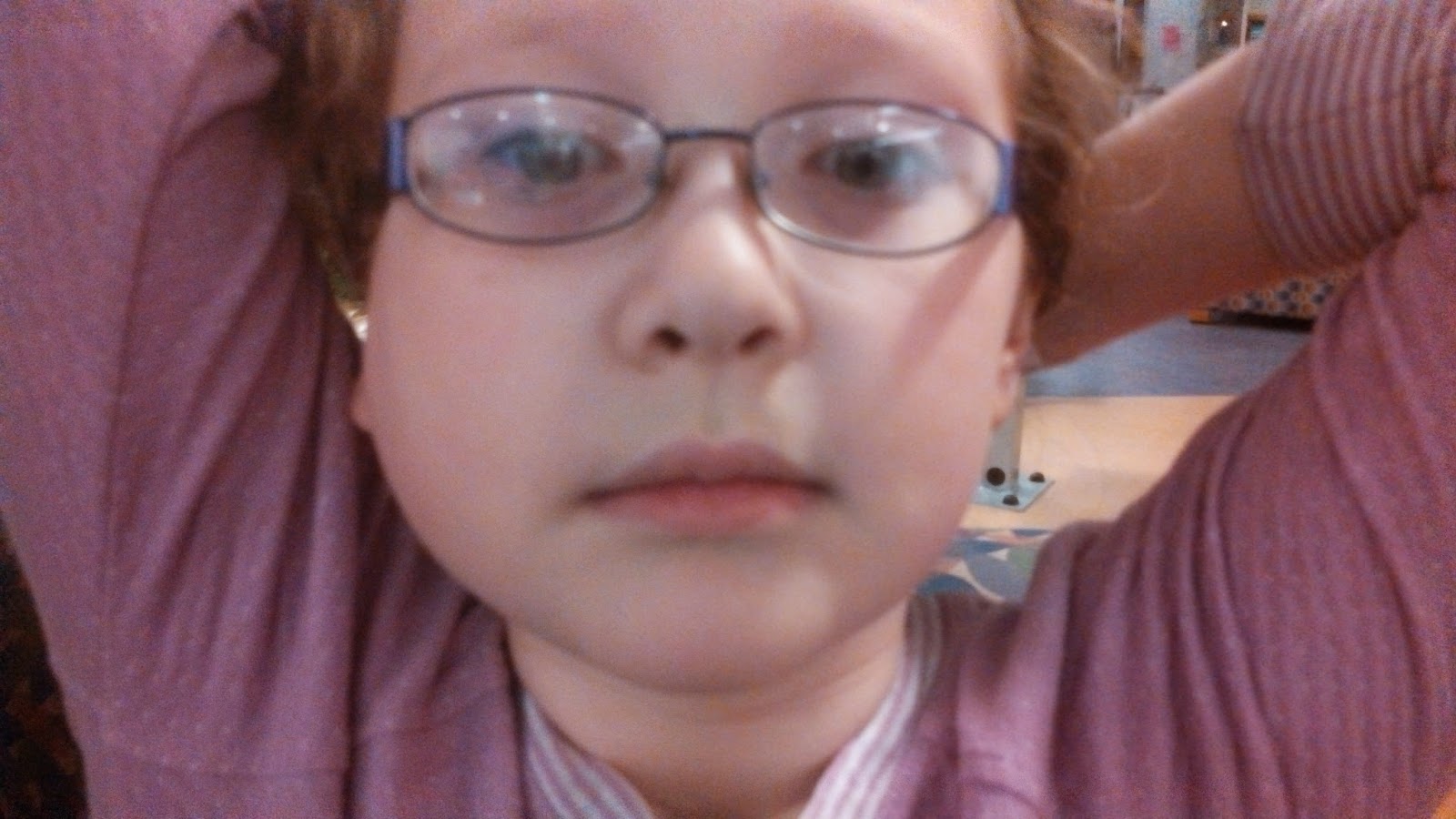 Emergency room trip. That there's an infected salivary gland. (Honestly. When does anyone do anything normal in this house? Forget strep throat or tonsillitis, no, let's puff up like a lopsided hamster instead.) Usually that doesn't warrant an ER trip, but that puff up there appeared in a single hour. That thing where you're freaked out, but you can't freak out or your kid will freak out? Definitely a suckier side of parenting. We went to the children's hospital. They prescribed antibiotics and Sour Patch Kids candy. I wish I were kidding. The sour makes the salivary glands work over time, which is good. But. How many kids in the world go to the ER and come home with a prescription for candy? SERIOUSLY?

But yeah, the year in Goobie. She's chugging along, nothing gets her down for long. Of course, when you lead a charmed life with prescriptions for candy, life is pretty good.

Oh, and she went as Bubbles at Halloween 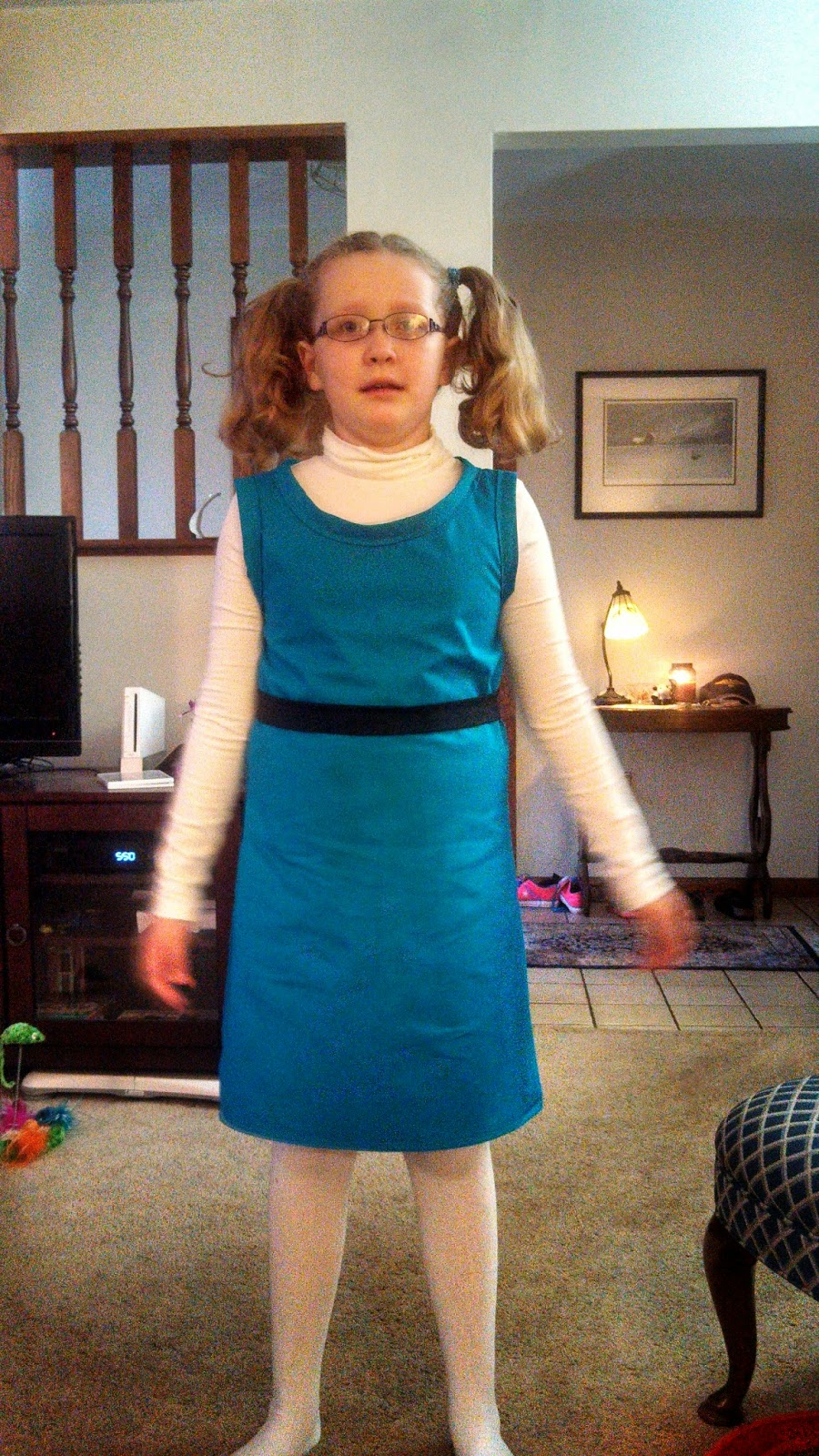 We spent the two weeks ahead of the holiday, while I was making the costume, singing the theme song. Doot doot do do dee doo do!
at 2:00 AM 12 comments:

During the Yule madnesss this year, I had seen a little clip-on lens thingie at Amazon for $10. I try to do close-up photography of yarn (usually), and it often looks like crap. It was only $10. For that, I could give it a try. I put it on my Christmas list, and the husbeast and his dad both tried to buy it for me, but by then they were out of stock. I had a sad. (LINKIE HERE! I remembered to add it.)

After the holidays, I wondered if they had more, and they were on sale! So I got a set. 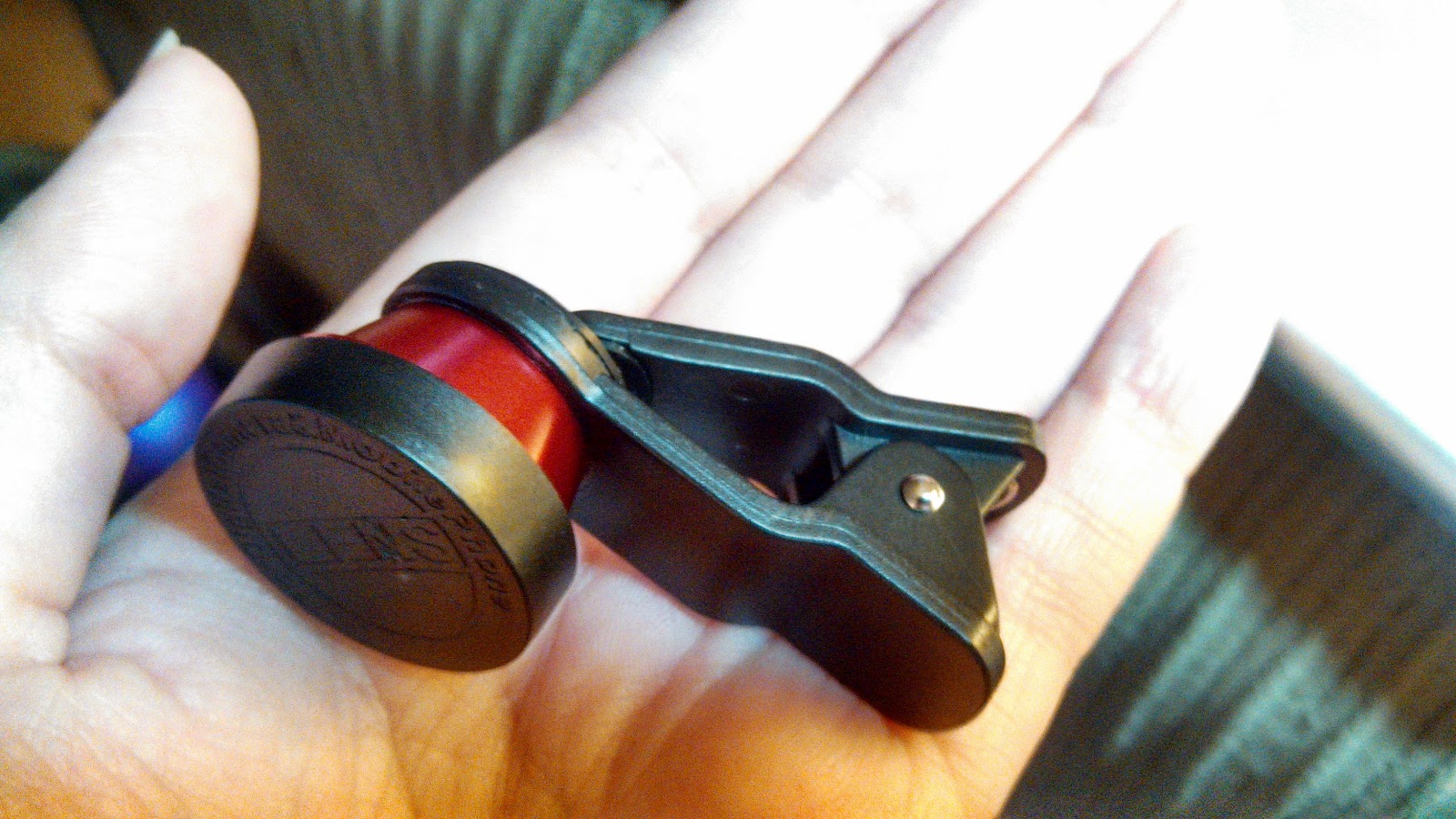 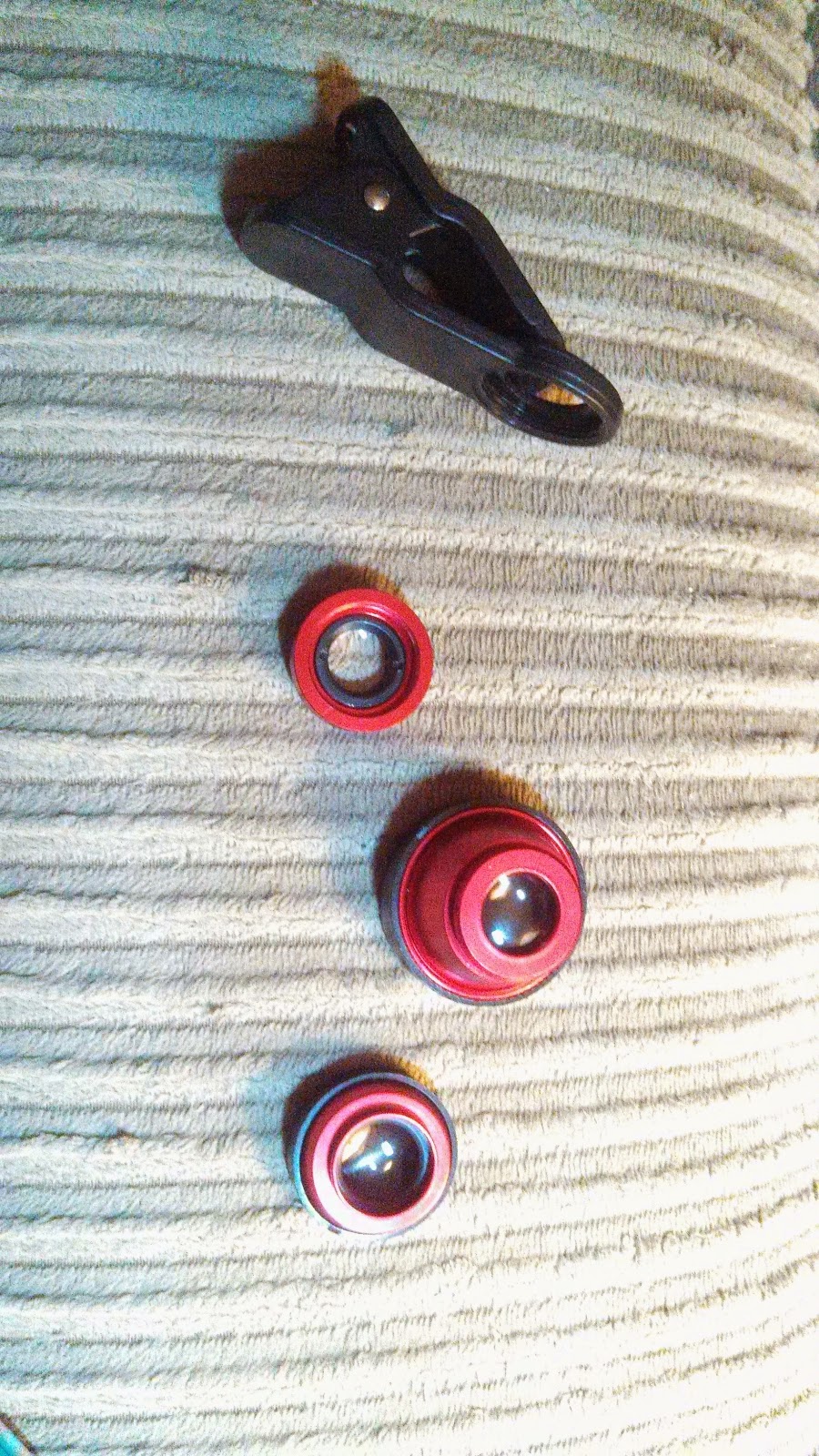 You get a little clippy dohicky and three lenses that you can put together different ways. Basically, a fish-eye, and two variations of close up macros. You clip 'em over the camera hole on your whatever. I'm showing it here on my iThing mini, so I can take a picture of it, but I'm using it clipped to my phone for the example pictures. It's meant for iThings and Samsung Galaxies, but the issue is about fit, not whether the camera can 'use' the lens. My phone's a Motorola Photon and its just fine. 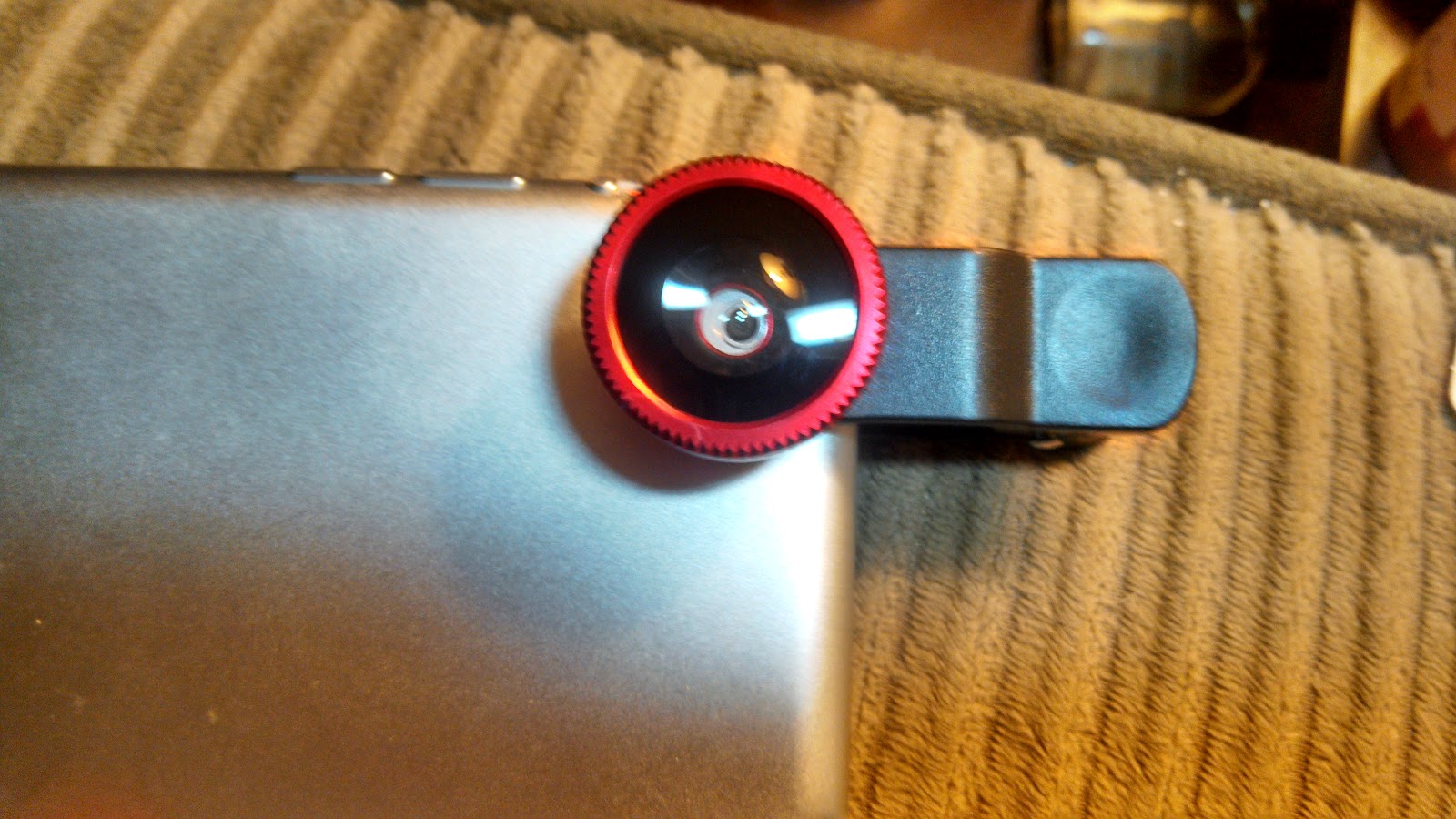 The fish-eye lens has some potential, though it's not remotely what I need and wouldn't have bought it if it wasn't part  of the whole set. (It even came with lens caps and a little bag to put them in.) But, hey, new lens, let's play. Below, the back yard, with and without the fisheye lens. 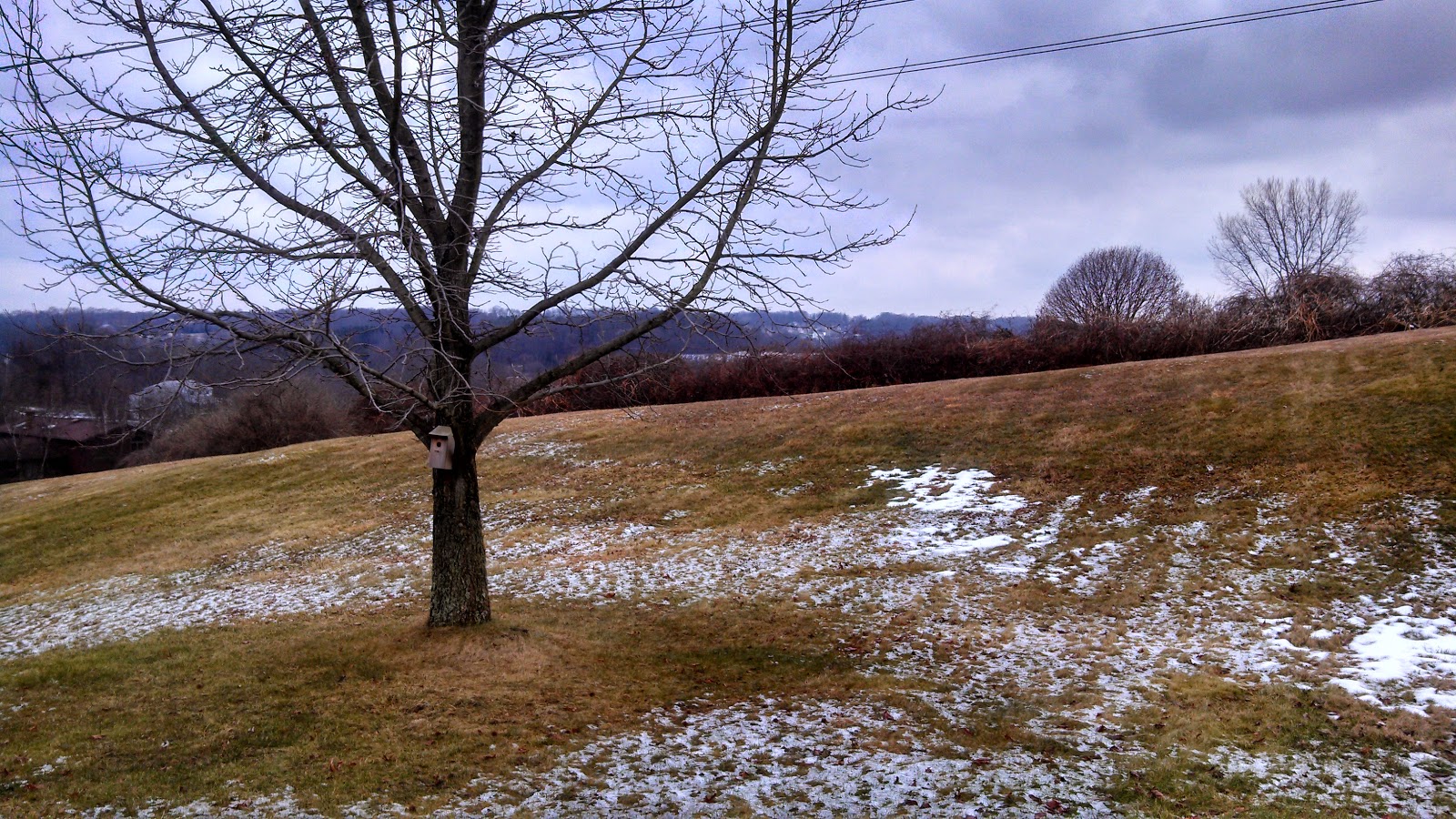 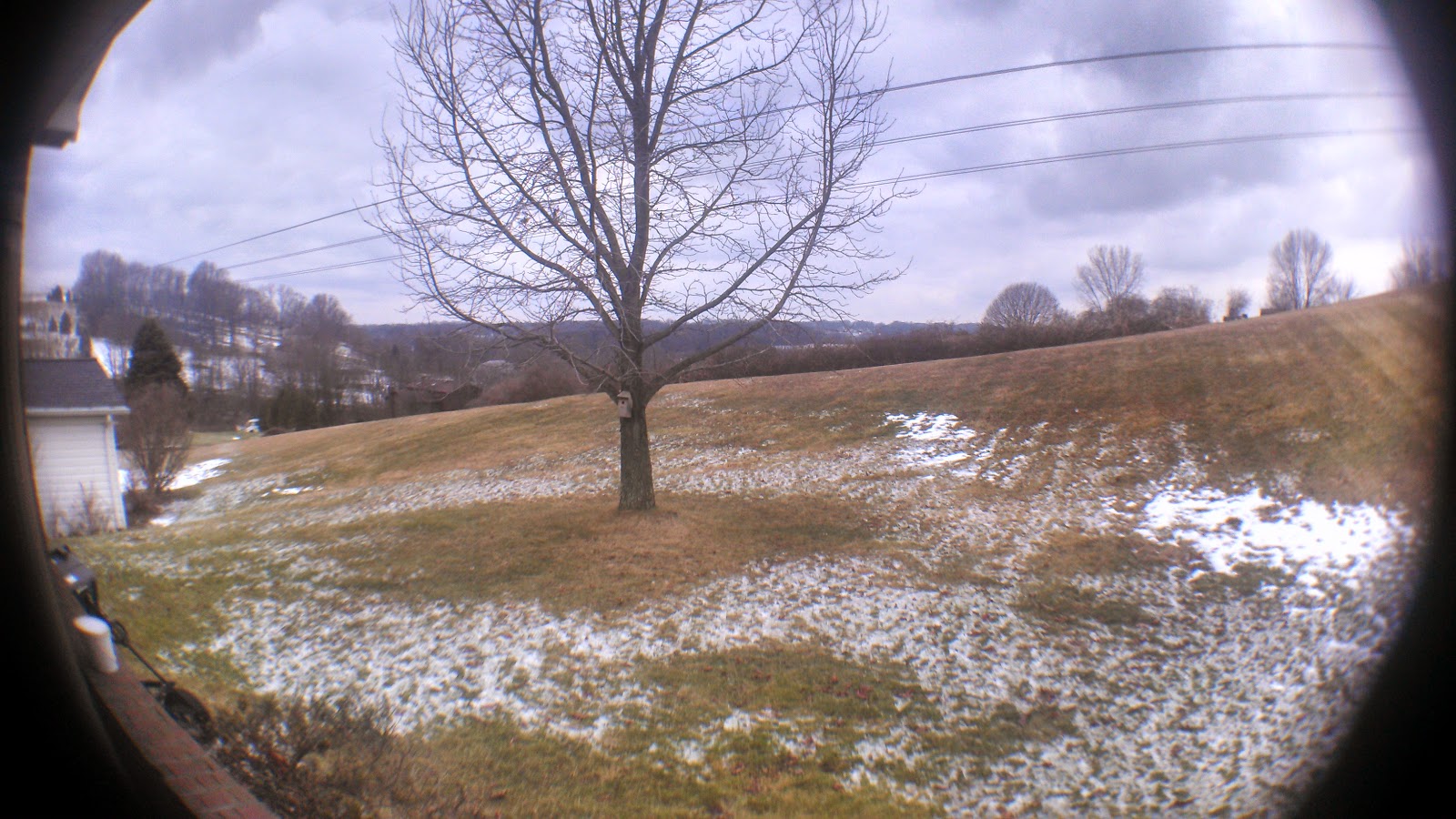 It seems obvious, but the top is without the lens, bottom is with. Fireworks shows may become fun. And I wanna try this on the Wall o' Cascade at the yarn shop.


But! The fun comes when I use the super-close up lens, to take pictures of yarn, which was the whole plan. 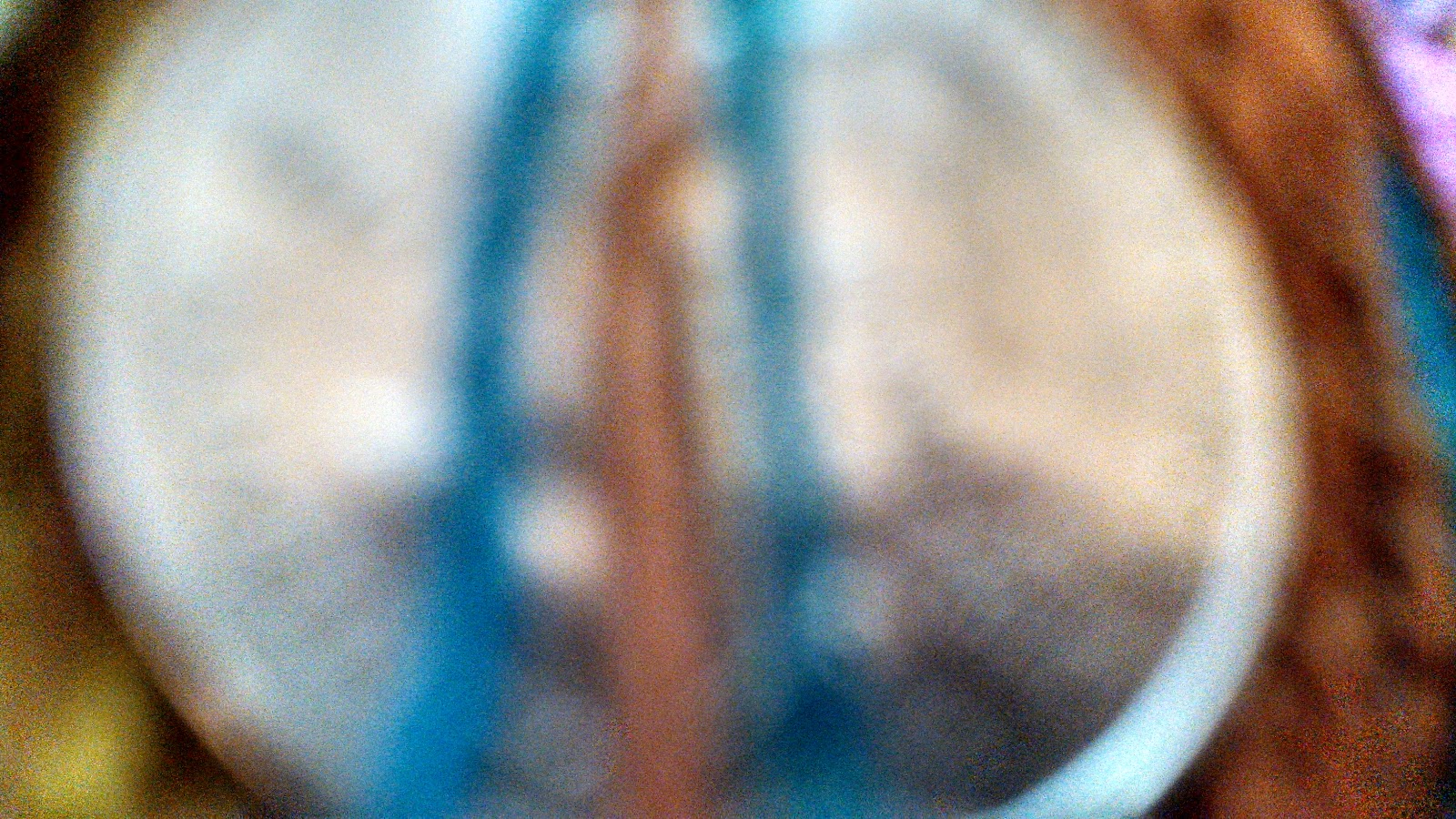 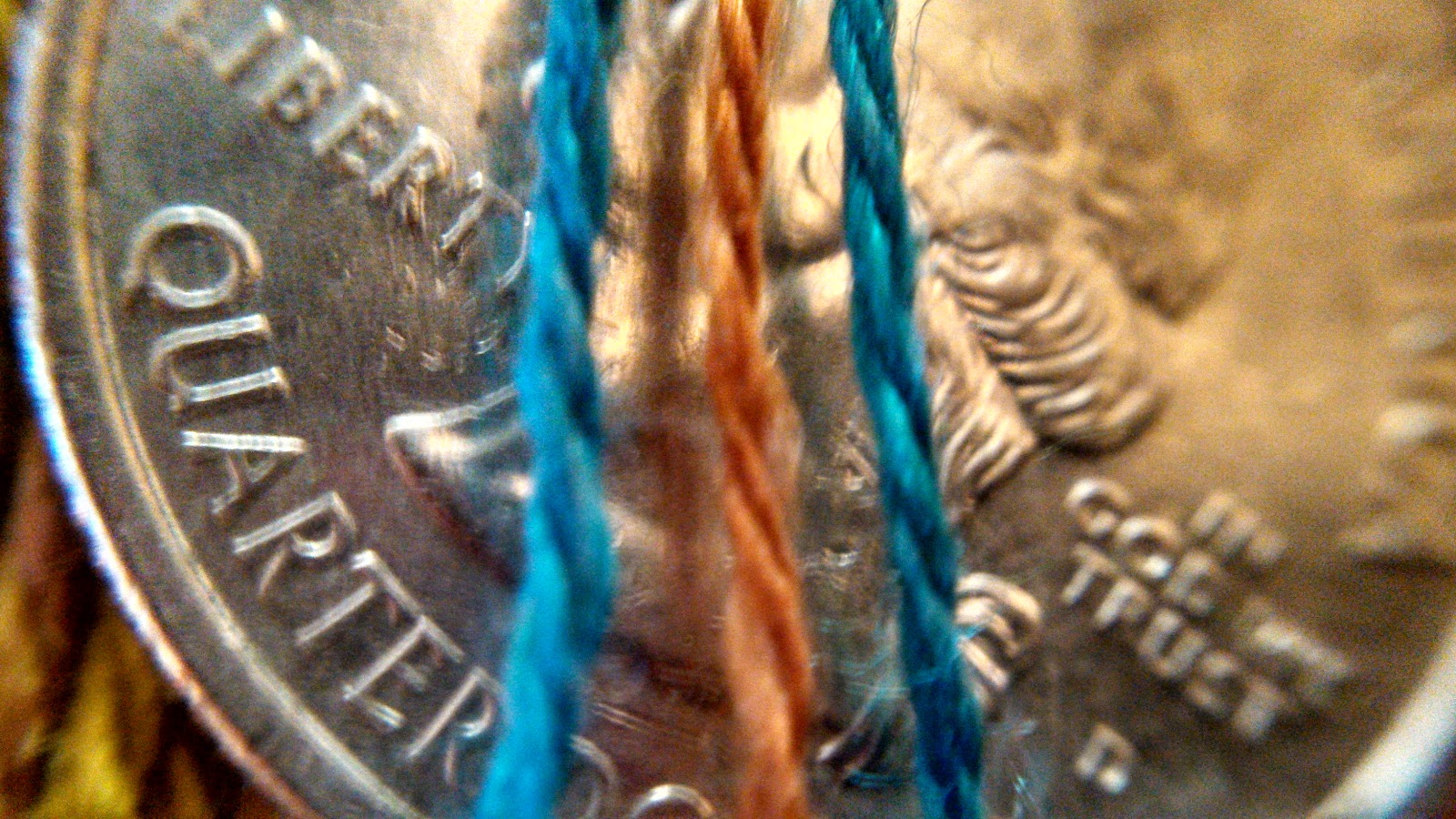 BWAHAHAHA. The top photo is without the lens, the bottom is with. Isn't that fantastic? It makes me look like I know what I'm doing. (Yes, that is hand spun yarn. Yes, I did it. I got 750 yards of three ply out of 4 ounces of 50/50 silk/merino blend. Yes, it took forever. No, I don't know why we're still discussing my sanity as if there's a question about it.)

So there you are, a super fun thing for low cost. Woohoo.

This is my first try, blogging from my iThing with the bluetooth keyboard (whee fun technology) I'll be back later too add a direct link to the lenses, but they're on Amazon. 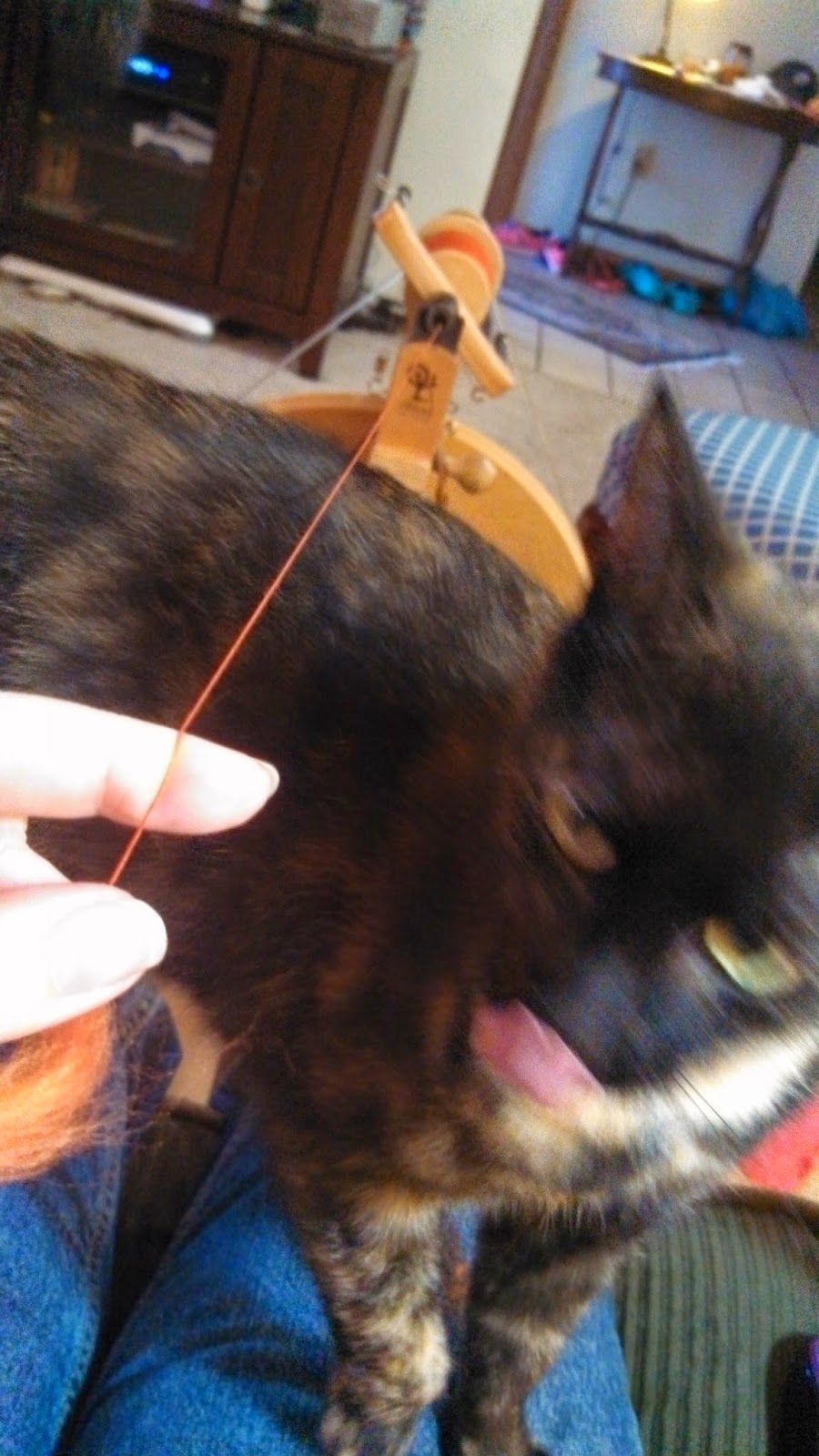