I'm still reading world history books. (Turns out I've got quite a few around here, picked up on sale and filed. Once I started looking, I was shocked at how many there were and started reading them. Seemed the right thing to do.) The current offender residing on my night stand is "The Atlas of Past Times" by John Haywood. 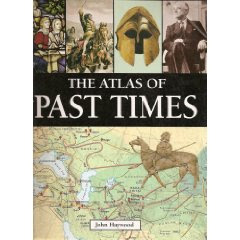 All it is, is the barfing up of standard historical theory, with some maps. I don't know why I keep reading it. I should throw it out. Or light it on fire. It repeats the myth that Cleopatra killed herself, among other tall tales (every modern profiler who has ever looked at Cleopatra's life has said that there is no way she'd have killed herself, ever - some details here). He also states the Aryans (invaders of India around 1500 BCE) probably figured out iron working independently. No idea how he decided that, I've never heard it anywhere else. The Aryans were perfectly located to learn iron working from the Chinese (who invented it), and nomads can barely do metal working at all, let alone invent new methods (imagine having to tear down a forge every night and move it on horseback).

But what really pissed me off? His glorification of the ancient Greeks and how wonderfully advanced and democratic they were. (Eight pages on ancient Greece and Alexander the Great. Three pages on the entire Han Dynasty. Just a bit biased? Hmmm?) So here's the argument, made in many history books. Athens was the first democracy. We've all heard this shit so many times, almost from birth, that we don't think to question it. But here are some things to think on.
In Athens, only 'citizens' were allowed to vote and/or hold office. Do you know who the citizens were? Free men, over the age of twenty, who were born in Athens and whose parents were born in Athens. In other words, no women, no slaves, no immigrants. You call that a democracy? And what fucking democracy has slaves, anyway?? Meanwhile, Athens was in an almost constant state of war, mostly with Sparta, and was repeatedly sacked, torched, and otherwise fucked up because they didn't negotiate with anyone, they put their noses in the air and claimed to be superior. Any of this sounding at all like our modern definition of democracy? 'Cause it sure as hell sounds like bullshit to me. (Incidentally, the US isn't a democracy either. At best, it's a republic, when the system works properly. So when our politicians go off on some riff about spreading the joys of democracy around the world, I want to force-feed them a political science text book.)

THEN there's a long paean to the glories of "Greek Achievement". The entire list of said achievements were actually accomplished somewhere else first, some stolen outright by the Greeks and claimed as their own, others simply inherited. Or otherwise just don't measure up. Here are some of the highlights and my alternative thoughts.

-Sculptors and painters were unparalleled in talent. Right. No paintings from ancient Greece survive so it's impossible to say anything solid about their painting skills, though I will say from the Greek color terminology in the language, they sure as hell don't SOUND like artists. Sculpture, yeah, very realistic human form. Whoopee. Shang dynasty bronzes are far more impressive in terms of skill and are also more 'creative'. Zilch on the superiority there.

-They invented drama and theater. Maybe. But I doubt it. Storytelling goes back further than the human race does, I'm betting. (Betcha Neanderthals told stories around the fire at night.) And I SERIOUSLY doubt that the Greeks were the first people to think of acting out the stories they told. Zilch again.

-"Greek literature, myths, and legends continue to inspire works of art, literature, and cinema today." Yeah. Them and a lot of other people. Zilch.

-Socrates, Aristotle, Plato. Snore. Aristotle stalled science for a thousand years in Europe with his non-experimentation methods. Socrates pissed off everyone. Plato founded a school. Hardly the first or only guy to do that. So, again. The only reason these guys are considered big deals is because Western Civ has made them so. Zilch. Archimedes, anonymous Chinese guys, Indian scientists, the engineers who laid out the major cities of Mesopotamia and the Indus River Valley and Ancient Egypt all had as many or more smarts. Zilch.

-Greeks wrote the first histories. No they didn't. The Egyptians did. And possibly the Indus Valley civ, if we ever decipher their writing. And the Greek histories are horribly biased ('we're so superior') and inaccurate because they were usually written hundreds of years after the fact.

-"were advanced in mathematics and geometry, and established medicine as a scientific discipline." Yeah. As for the math and geometry, go talk to those engineers in Mesopotamia, Egypt, and the Indus Valley mentioned above. As for the medicine, it was the ancient Egyptians who founded anything like medicine in the west, and in the east, the Chinese were doing herbalism and acupuncture for at least two thousand years before the Greeks ever turned up. (See the Ebers Papyrus for an idea of Egyptian medicine - very clever folk, those Egyptians. And see the Yellow Emperor for Chinese medicine.)

-Then there's a bit about the glory of the Greek writing system/alphabet. It was phonetic. This asshole claims it was the first phonetic alphabet, but actually the Greeks stole the idea from the Phoenicians. (Phoenician, phonetic, get it?) And it also goes on to talk about how important education was to 'Greek Citizens'. Meaning no one gave a shit if the women, slaves or immigrants could read or not.

Some great civilization. I have no idea why everyone inflates it into some great foundation for western civilization. I'm happy as hell we AREN'T founded on them. It would suck.

Okay. Got that off my chest, maybe later I'll post something relevant.

You know, reading your paragraph on Greek democracy, I was preparing this really snarky thing along the glass houses/throwing stones line - and then you completely killed my argument. Also, two words. Electoral College.

If you want a very funny history book with quirky bits in it, John O'Farrell's "An Utterly Impartial History of Britain" gets most stuff right, draws modern parallels and leads to strangers staring on the train as you attempt not to argue out loud with the author...

I adore you with an unparalled and slightly insane devotion-- (don't freak out, I'm not a stalker)-- I just beg you not to move out to California where you would be skinned alive and burned at the stake.

You make me yearn for time to read.

As someone who's devoted the last 3+ years (and probably the next twenty to come) to the study of the ancient Mediterranean, I just have to say: HELL YEAH.

There were a lot of xenophobic cultures in the ancient world, but ancient Athens had some of the shittiest-ass civil rights EVER. I wouldn't go back and live in ancient Athens if you paid me, especially not as a woman.

Boy, I learn stuff from you...reading this entry closely (with all the links) will take me some time.

However, re slavery: it seems to me that slavery was essential to any complex society: somebody had to do all the work, which was considerable. And it was assumed that slavery in some form would exist forever...until the industrial revolution came along, giving us machines to replace those people. Am I wrong here?

I get the same urge when the politicians throw the democracy word around.

mmm, it always confuses me when history books say "blah blah, greek history, blah blah great acheivements, blah blah, mathematics and etc blah" then go "crusades, mathematics architecture blah"... The islamic countries that Europe met during the crusades had a (to my mind anyway) much bigger impact on the Eurpoean and world stage simply by having arabic numerals, let alone all the rest of the knowledge they imparted.