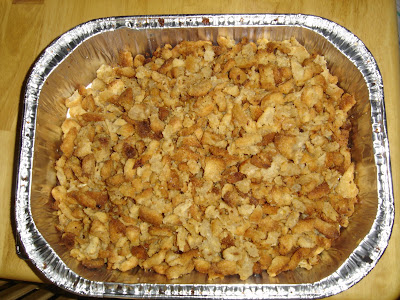 We're celebrating Thanksgiving tomorrow, so the last two days have been spent cleaning and cooking. The most horrific excess of the last... hell, YEAR, has been the dressing, made according to the husbeast's traditional family recipe. (Incidentally, dressing is bready stuff like this, cooked by itself. Stuffing is when you, well, stuff it. Up a bird's butt, usually. Kind of a recipe for bacteria, and it screws with the cooking time of your turkey. So we do it this way.)

Six loaves of bread, three pounds of butter, two large yellow onions, and a lot of salt and pepper. You remove the crust from the bread (and feed it to birds), tear the rest into shreds, mix with salt, pepper, and chopped onion. Pour melted butter over the whole thing and roast in the oven at 350 F anywhere from two hours to the rest of your life. Stir every ten minutes. Yeah. For three hours, today. It was a laugh riot, I tell you.

It looked like this to start; the roasting process cooks it down a bit and the two pans full reduced down to just one. 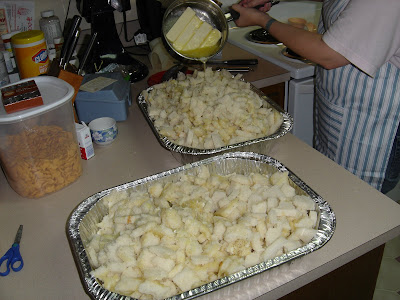 Considering this stuff exists only to pour gravy on, my mind whirls. But it isn't Thanksgiving without this stuff in the husbeast's family. For years I've wanted to do a beef roast and wasn't allowed to do it until I promised to make this dressing and gravy to go on top. Next year I want to try lamb. You can make lamb gravy, right?

They're lucky they only make it twice a year (Thanksgiving and Christmas) or the whole family would waddle to their deaths.


Otherwise I made a couple pies - one experimental - egg-cheese brunch and cinnamon rolls (doing a slow rise in the fridge) for breakfast, and prepped some other stuff so the meal will throw together faster tomorrow.

I'm beat. I still have some crap to clean out of my office before the in-laws arrive, in about an hour.

My God, of COURSE you can make lamb gravy! How does one eat a lamb roast without it? Does one? Shock! Dismay! I'd probably put that on par with Husbeast's family doing without their dressing and gravy. If you roast a meat, it must have gravy, imo. At minimum, you have to freeze the drippings so you can use them for another time, you know, if you're feeding heathens who don't like gravy. I've got pork, turkey, chicken, and beef drippings in my freezer so I'm always ready to whip up some homemade at a moment's notice.


...no such occasion has presented itself, but you just never know. Unexpected company? Make 'em some gravy!

Yeah, it doesn't matter what the traditional dish is, you just have to have it every year.

For the last couple of years, I've made our dressing in the crockpot. Takes about 4 - 5 hours or so (depending on your pot), but it frees up the oven, cuts down on the stirring, and makes it far less likely that anything will burn. I highly recommend it.

(I also did the potatoes in a crock this year, too. YUM.)

Bread and butter with onions? What's not to love? My mouth waters at the thought! My spouse puts eggs, OJ, and chopped dried apricots in as well. Serve it with richly turkied gravy and I could happily waddle to my death.

How weird! Really, you don't want stuffing in the bird? I don't understand. OK, so the timing and the bacteria are moderate considerations, but isn't the point of stuffing that it absorbs the meat juices? Well, there you go, I never heard of doing it that way.

Oh and a gravy for lamb is fabulous. Yum yum.

My dad's dressing always had fresh sage in it - to this day, the smell of fresh sage says "holidays" to me. I don't even try to replicate it anymore, because I can't (partly because I don't eat meat anymore, so I don't cook the turkey or have the stock and drippings to add to it). I used to love helping him tear up the bread the night before, so it could dry out before cooking it.

I wonder what my kid will remember from the holidays?