The first week of August, I went over to the school to transfer the Goob in from the program she'd been doing on line last year. They said the school secretary was on vacation and to go back the next week. (Like no one else is qualified to handle a kid's paper work? I wonder about many things having to do with the school administration here.) Second week, there I was, filling out paper work and providing all sorts of ridiculous documentation and it was all mostly good, and then the secretary mentioned that school started for the kids on August 23.

I'd stupidly assumed it started near Labor Day (first weekend in September), because, well, they always do. And, in my defense, a lot of schools around here aren't going back until today, or even next week. IT IS NOT MY FAULT.

This revelation led to me running around like a lunatic for two weeks, because the Goob, as always, had timed a growth spurt to something important, and none of her clothes fit. Literally. None. We've outfitted her from the skin out. Shirts, pants, sweaters, raincoats, shoes, socks, outlet malls, malls, Target, Target again, mall again, Target AGAIN.

We did get her sent off successfully on the 23rd, wearing clothes that fit. I only sort of lost her once. (I met the wrong bus; oops.) I still owe the district a couple pieces of paper, including something that needs notarized (seriously?) and I keep getting more documents to fill out; I think they've got my contact info in ten thousand different places now. I'm tempted to just have it tattooed to the Goob's forehead.

The Goob has taken to it like a duck to water, even though she inevitably caught a germ the first day and is a big old puddle of snot. I've been sitting on the back porch, all surrealed out, wondering what in fuck and when having a kid is going to feel normal. (Yes, surreal is a verb in my world. Don't argue with me.)

The only person not loving it is Sekhmet. She's been drooping around the house, all sad and pathetic, during the day. Because she misses her bald kitten.

Now I get to go write a letter regarding the summer reading program. You know, the one the Goob wasn't enrolled in because she wasn't IN THE SCHOOL until three weeks ago. I got a very strongly worded, all-capital-letters note about it last night. I'm sure I can compose something suitably... polite.

This is the couch we owned when we adopted Sekhmet: 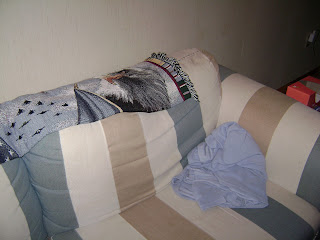 See how it's all sagging and drooping, like there's been a cat laying on the back of that couch for seven years?

Yeah. So when we got the new living room furniture last year, we both agreed that the one place the cat was NOT allowed to be was, yes, on the back of the couches.

So where does she want to be? 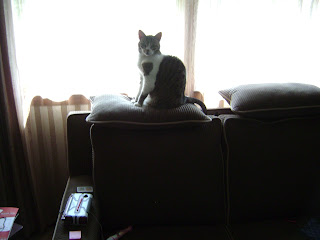 Just when I thought I was getting the hang of managing these damn migraines, I walked down the laundry aisle at Target, and all the chemicals nailed me in the face.

I'm on the back porch now, in humidity (it helps my sinuses), having taken an Imitrex. I'm about to take another. (Doc says I can. No OD today, thanks.) But before I start slurring my speech, I wanted to blog.

Not sure what about, but I want to start blogging again, daily. I know, going from a month off to daily blogging is unlikely to happen, but I want to work toward it. Probably at the speed of dark, but we all need goals. This one isn't even in the top ten of the craziest ideas I've set myself around here. (I still can't believe I knit a Bohus sweater on sock needles in three months. Can anyone? That was some crazy shit, right there.)

While laying on the couch in my have-a-migraine, Victorian maiden swoon, I started brooding a bit on everything. Like why I'm suddenly stalled after years of dealing with crap. I've concluded I'm not taking to civilian life very well.

Which is just hilarious on the face of it, because I've been a hippy peacenik since day one, regularly told off officers, and spent the hub's last five years hating an entire base so well that my blood pressure was 180/200. And no, I don't really miss the military. (I miss some of the guys. There are some nice folks in the military, usually at enlisted levels.) But I got used to treating everything as temporary. We'd be gone again soon, so there was no point to... well, fill in the blanks. Get a decent car, spend money on the house, have a kid, get a pet, buy anything larger than a bread box.

So... I need to get over that. No idea how, really, but reminding myself that we're here to stay, as needed, is helping. I think.

Several friends have been encouraging me to start doing a thing they're calling "Shit You Missed on Twitter". I hadn't done it because it felt an awful lot like cut and paste to me, but today there was an exchange that had me hooting and laughing out loud, so you're stuck with it.

It all started with a shout-out because a friend of the family has kittens who need a home. (Which has turned into a whole other bundle of annoyance, but I attempt not to digress.) That was when the commentary started. (Names shortened to protect the guilty.)

@Deb: @SamuraiKnitter WHERE did you get kittens??

@Zen: @Deb @SamuraiKnitter Sekhmet must have been getting a little hey-hey?

@Terby: @Deb @SamuraiKnitter I just figured Goob was creating them from test tubes in your basement.

@SamuraiKnitter: @Terby @Deb @Zen I'm sure if the Goob manufactured cats, they would glow in the dark. Purple.

@Zen: @Deb @Terby @SamuraiKnitter They would also talk and fly.

So. When the rumors start, yes, I'm selling glow-in the dark purple glitter kittens that talk and fly. One per customer. While supplies last.
at 7:28 PM 10 comments: