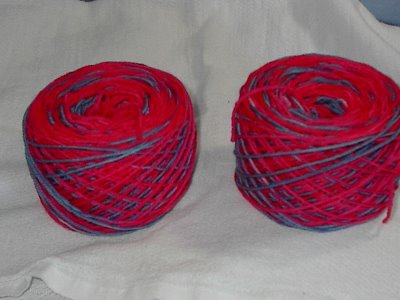 For a few years now I've been wanting to experiment with dying my own yarn. What with one thing and another (you know... pregnancy, moving seven thousand miles, raising a toddler) I've just now begun the experimentation process. I've been reading up on the subject for years, and I suspect have too much knowledge for my own good. Some things are better done in ignorance. Anyway, instead of a legitimate tutorial, this is more of a rambling monologue on what I did, how it turned out, and what I'll change when I do it next time. (And why.)

My materials were two balls of "Devon" yarn from Elann. It is advertised as 'unshrinkable' which I assume is a variation on superwash, and wanted something unfeltable for my first round of boiling yarn. Seemed the safe way to go. I used the bleached, bright white yarn (color #133) because I wanted to see how bright I could get the colors; if I were going for a muted or pastel, I'd look into dying over beige, off-white, or even a very light gray. (Plus you can do all kinds of fun things, over-dying colors, but I'll get to that in another post.)

The big question on my mind for the last year or so had been, what kind of dye to use? Commercial, chemical dyes, or food-grade colorants? I finally settled on Wilton's paste food coloring for two reasons: I've got a baby in the house, and I'm a cheapskate. Using a dye based on corn syrup seems insane, but the safety issues are negligible and that became the deciding factor. It's FOOD COLORING - use whatever kitchen utensils you want, it doesn't matter. No having to go out and buy all-new everything to use for dying, and then remember not to use it for food. Plus, it's easy to find, affordable, and comes in 27+ colors. (They sell 'theme' sets of food coloring at Wilton's. Wanna knit your kid a SpongeBob sweater? Buy the food coloring kit and dye the yarn the exact colors you need. The possibilities are endless.)

FOOD COLORING ONLY WORKS ON ANIMAL FIBERS. Let's make that real obvious and get that information out there. It won't stick properly to cotton or linen.

After a few weeks of 'net searching, I had a general formula for crock-pot dying with food coloring: One teaspoon of food coloring (about 10g?), 3/4 cups/175ml of white vinegar, and water. Cook on high for two hours. Unfortunately, there wasn't any information on how much fiber that was for, or how much water to use. So I winged it.

First, I skeined the yarn. I used my table, and put a box on top of it, to make a large loop of yarn. I wanted decently long color repeats in the finished product, and that means a longer skein than your niddy-noddy will produce. 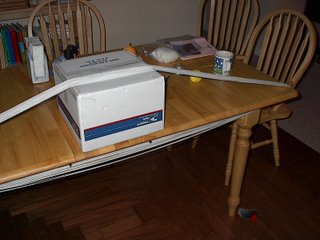 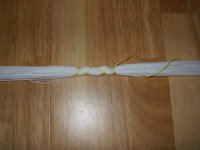 After that, I tied off yarn between the planned color sections. I wanted to see what a loose wrap would do when it came to dye absorption, so that's what I did. Otherwise, I would use a contrasting color of skeining tie to mark the color-change spots. 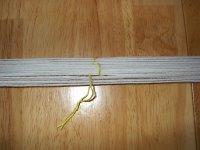 Then of course I put little ties all around the rest of the yarn to keep it from tangling in the dye pot. I put them about every three feet/meter, and it was too far apart; next time, I'll try every two feet.

After that I put both skeins in a bowl of water and soaked them overnight. Next time I do this, I'm going to put vinegar in the soak water instead of waiting and putting it in the dye pot. I'm not sure that will avoid the problems I had, but it should. 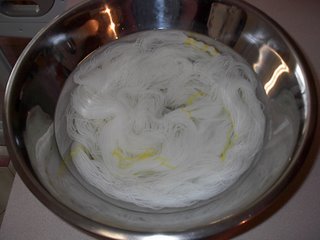 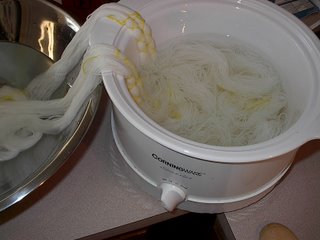 So, the next morning, bright and early, I put the yarn in the crock pot (with the destined-for-another-color part of the skein hanging out into the bowl of water), put in enough cool water to cover (about, oh, a liter and a half?) put in 3/4 of a cup/175ml of white vinegar, and about half of a large container of food coloring left over from the hair dye experiment over the summer. In technical terms, that's about half an ounce/14g(?) of Rose coloring. 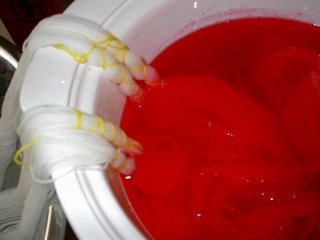 The food coloring immediately clumped up and I had to stir like a madwoman to get it to dissolve. Stirring yarn is bad. It tangles the hell out of it. Plus if that wool hadn't been superwash, I'd probably have wound up with a crock-pot full of felt. Then I put on the lid, turned on the crock-pot and crossed my fingers.

I went back every half-hour or so and prodded the yarn with a wooden spoon, in the hopes that it would help even out the coloring. At the end of two hours, the house reeked of vinegar, and I decided the yarn had stewed enough and to hell with exhausting the dye pot. (Exhausting the dye means that your yarn is sitting in a pot of clear water; all of the dye has stuck to your yarn.) Over to the sink I went. 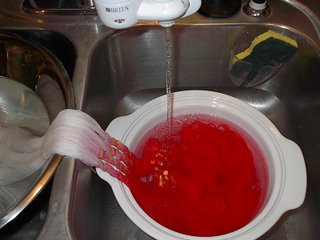 In an effort to not 'shock' the yarn (shocks in temperature are hell on wool), I began running hot water into the pot, and gradually shifted it back to cool. Once it was cool enough to handle, I got my hands in and began gently squishing out the dye; my hands turned pink. Lovely.

Then I shifted the yarn; white bits into the crock-pot and the already dyed part in the bowl.

For the blue round (cornflower blue food coloring), I tried some things differently. I used VERY little dye in comparison to the first round; a bit about the size of a bean. Then I dissolved it in a tea cup with hot water before pouring it into the crock-pot, which was already full of water. And I only used a half cup/125ml of vinegar. I flipped it on, and away we went again. 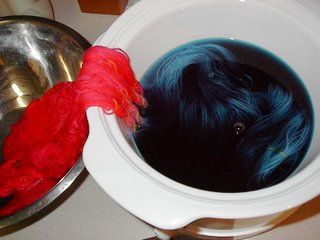 This time, instead of waiting and waiting and waiting for the dye pot to exhaust, I pulled the yarn when I liked the color (allowing for the fact that it would be lighter when it dried); it took about an hour. Then back to the sink for more rinsing and squishing. Since I was completely finished dying, I also added a squirt of dish soap and gave the whole thing a wash.

Then I laid it out on racks over the sink and left it to dry overnight. In the morning, it still wasn't dry (next time I will run it through a spin cycle in the washing machine), so I hung it up away from the baby, and left it for the rest of the day. 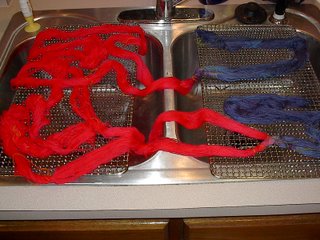 That evening, I untied the skeins and wound them into balls, and then from there put them on my ball-winder and produced center-pull wheels. My fingers turned pink from handling the yarn, but no blue rubbed off. I'm putting that down to WAY too much dye in the pot; once I knit it up, I'm going to give it a really good wash and that should solve the problem. I'll never use that much dye again.

One reason for the color choice in this experiment was to try producing a decent purple along where the colors met; when using vinegar as a mordant, that's tricky, because it tends to turn purples red. I did manage to produce a nice violet, so the two-part dye process does work.

I also wanted to see how bright I could get food-coloring based dyes; the answer is, pretty damn bright. This pink is flourescent. I, the big fan of bright colors, am even hoping it will fade some. It almost hurts the eyes.

FINAL THOUGHTS:
Use less dye than you think you need; you can always add more.

Unless you've got a really good reason not to, use superwash yarn. It saves a lot of trouble and worry.

Keep track of exactly how much yarn, water, food coloring, and vinegar you use, and what the timing and temperatures are, if you want a hope in hell of reproducing the effect, ever again.

Pull the yarn when it's a shade or two darker than you want it, don't wait for the dye pot to exhaust.

Use a lot of ties to keep your yarn from tangling; winding up is the worst part of the whole deal.

This was really, really fun, and I want to do it again soon. I'm thinking it would be nice to do a tie-dye overdye with this cornflower blue overtop of either a light blue or an aqua, and then use it as one color of a two-color stranded knit. And I wanna up the vinegar content in the dye to make the color 'take' really fast, and then try pour dying, where you just dump color over the yarn and see what happens. And...

I've never tried the food coloring. For that matter, I've only ever dyed unspun wool rather than the yarn. Sounds like a fun experiement for the summer vacation this year. I've already ruined my crockpot for anything food related thanks to the acid dyes, anyway...

that looks like so much fun. I'm impressed. And desperate to spend at least some of my annual leave next month doing exactly this!

Question - how did the crock pot shape up? Will the husbeast for forced to endure purple pot roast???

and a further question - any advice on skeining? Everyone just says, 'then i skeined the yarn' like it's something you're born knowing how to do. I imagine there's a trick.

Hey -- I know something about winding yarn off huge cones into skeins -- I started out as a weaver about thirty-eleven years ago before my recent segue into knitting.

So let me share a weaver's craft secret with you guys (that's Northern for "y'all"):
the secret to skeins that don't tangle is "the cross".

I've been Googling for a good picture to share and can't find a perfect one, but go here
http://www.allfiberarts.com/library/aa99/aa100999.htm
and look at the drawing that says "cross".

Basically, if you wind that yarn out and make a figure 8, the yarn has to stay in order where it crosses itself. It can't get out of order at that point.

(I've dyed tatting thread by winding a cross on my hand.)

If you are trying to figure out how the heck this works, fold your hands with the fingers interlaced. See how your fingers are sort of locked in order where they cross?

[dry]I've also wound 11 yards of warp for my floor loom this way, so I can guarantee that it will keep an 800+ thread warp, each thread 33 feet long, in order.[/dry]