We've had bugs of all kinds around here at House O' Samurai. The Baby's at that stage of life where she catches every germ imaginable while her immune system figures out what to do with them. Half the time I catch them from her, and her runny nose and sniffle turns into a full-on chest cold for me - you know how it goes.

Computer bugs and sleeping off germ bugs have thus far kept me from posting the baby video over on You Tube, but I'll get to it soon, I swear.

Then there are the knitting bugs: 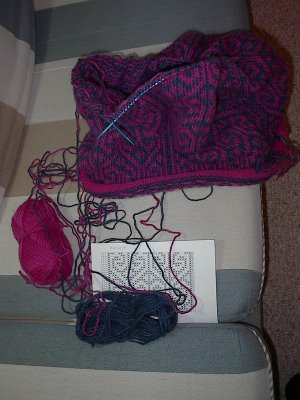 I had hoped to have the body of the steeked jacket done today, but I discovered a HUGE mistake in the pattern (committed while knitting and reading again - you'd think I would learn) and ripped back two rows and put it all back on the needles. I've got four rows to go and it's done - maybe tonight during Mythbusters.

I was also plotting how to do some crazy Cat Bordhi felted moebius-cast-on bowl thingie (it's all about felted containers at the moment), and had picked the yarn out of the odd balls in the stash: two balls of llama yarn leftover from the watery llama scarf, and one ball of purple/pink left over from the chainmail sweater (from "Knitter's Almanac" by EZ) that I knit in, uh, like 1999 or something. 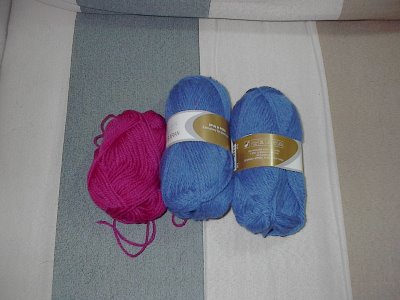 And I realized, as usual, I was arranging it so that everything I worked on was the same color. Again. Bugger that. So I'm hitting my fallback plan. 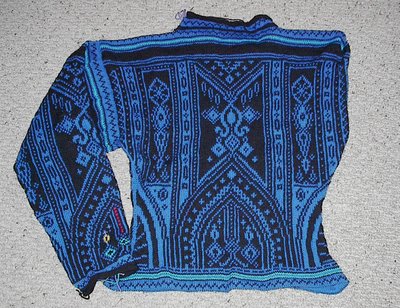 I think it's about time "Innsvinget Ganser" had a second sleeve, don't you?

EDITED TO ADD: "Innsvinget Ganser", aka Princess-line Gansey, is from the book "Norsk Strikkedesign" from Unicorn Books, page 50. I've considered, for 2008, declaring it the year of this book and knitting my way from cover to cover, since I want 90% of the sweaters shown in the book. If anyone else has a copy or is interested, perhaps we could do a single-sweater "Strikke-along" one of these days and we could all knit something, knitters choice. Maybe in the fall?
at 3:16 PM

the ganser is beautiful! Get it finished! Who's it for?

Hope you and The Baby recover from your bugs soon....

The ganser is for ME! MEMEMEMEME!! I've been knitting it since 2004 (no joke, the date's knit into the hem), and it always gets pushed back while I knit on some gift or other. Not this year.

I am at the same time stunned and jealous every single time I see that sweater. Please tell us again - your own pattern, or did you find it in a book someplace? I'd almost rather do that than lace!

That is a beautiful jumper, I can't wait to see it finished.

Yup. Unless you have a scheduled amputation coming up, I'd say a second sleeve is in order. That sweater deserves to see the light of day!!!

I'm TOTALLY up for a 'Strikke-along'! I'm becoming obsessed with Norwegian designs, and am planning on playing with some on the next pair of socks I knit. I'll have to get that book in the meantime!

Ohhhh, catch me, I think I'm swooning over your ganser! I'll be rolling on it like Sekhmet next.

If I survive the steek-along, count me in for a 'Strikke-along'!

i'm in the middle of my second sweater ever, and have never done two colours in the same row, if you have suggestions for learning before the fall I would DEFINATELY like to do a strikke along. I don't have the book but I am drooling over your current sweater so much that I think I need (not want) the book. My husband doesn't seem to agree that this is a need but I can budget the book in. :)

Is there any place to get the book other than school house press? I'm in Canada so it would cost 20-30 dollars just to ship it here. And Julie, have you looked at the book just above it poetry in stiches or something - I'm wondering if it is good - the picture seems nice

I've got Poetry in Stitches too. It's very nice. Not 100% truly traditional Norwegian knitting, but she takes motifs from local musems - textiles, boats, old trunks, you name it - so it's close enough for me.

Have you tried Amazon.com or some of your local book dealers? They should be able to order it for you at local book stores, and you'd just pay the price of the book. Of course you'd have to wait longer, but them's the breaks.

How could you not finish that sweater!!!! It's GORGEOUS!!! Yeah--I've got a couple of books I'd like to cover to cover...but I just got the two Knitting on the Edge books by Debbie Bliss and the two of the three Stitchionaries by Vogue, so I'm busy with delusions of grandeur while I finish the now infamous Glitterfuckingspun shawl. (I took a quick crochet break for friends.)

Catie, you can get it here: http://www.knittersbookshelf.com/new_arrivals.htm, $29.95 base price might make the shipping more palatable.

Somehow it slipped my mind to look at amazon.ca... silly me - I'm salivating over my new book arrivals that came today - MasonDixon, Knitting without tears and socks soar on two circular needles -- I want to knit socks and need to understand this circular needle concept. It intreages me.