The pictures and stuff.

All rightie. Vacation knitting. (Please note that everything is blue, for Project Spectrum's June color, almost like I planned it or something.)

The sock. It is a practice sock and I'm still not sure I'm knitting it's mate. (Whether or not it fits will be the deciding factor. Right now it looks like I've got fifty-fifty odds of that.) Instead of the PomPom sock pattern from over at Mag Knits (which I said I was going to use), I am using the generic sock pattern from the Yarn Harlot's latest book, Knitting Rules. The PomPom sock was too minimalist for me, since I had no idea what I was doing. And I figured if anyone knows how to knit a sock, and explain it to me, it's the Yarn Harlot. And she does. 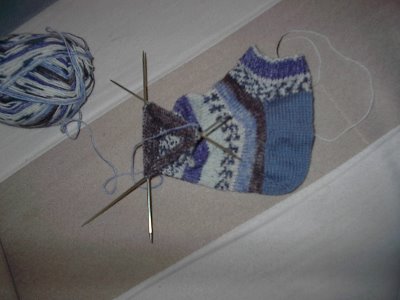 The heel flap is wonky because I wanted a solid colored heel (for some stupid reason) and joined in the solid yarn as soon as I started the heel flap because I didn't know what I was doing. And it lacks a leg because I am knitting a footie-type sport sock. Otherwise, it's knit with one of the first of the self-patterning sock yarns, name unknown, that I bought maybe five years ago, with the idea of knitting socks with it. It takes me a while to get around to this stuff. Hah.

I also knit another swirl afghan square. Even with baby care, I cranked it out in two days, so these really are NOT that hard or complicated. 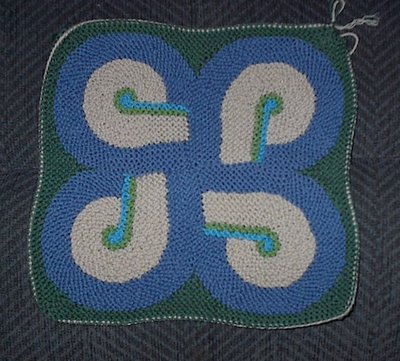 As with the first one, my cast-on is tight so the edges are scallopy. (Plus it hasn't been blocked in any way.) But it's okay 'cause I'll be taking the cast-on back out again when I put them together.

In other news, the doc is calling in a perscription for the shingles (after 45 minutes on hold listening to REALLY crappy music), and since it worked the last time I had shingles, all should be well in a day or four. The baby wants constant attention like she had with grandma and grandpa and has been a monster all morning. And the toilet in the front bathroom backed up and puked icky water all over the floor.

I'm buying chocolate while my perscription is getting filled.
at 9:00 AM