Thanks to all who commented favorably on my blue sweater. Annie, loved the suggestion to wear it with just one arm done because people wouldn't notice. I've been thinking about how to finish it while I've got ten million other things going on, and I've decided that I'll work on it once a week during Sci-Fi Fridays (conveniently, tonight). The Sci-Fi channel runs a bunch of shows I watch every Friday, it's the one almost guranteed time I sit down and knit, for sure. So I'll work on the sleeve weekly. It'll probably still take to Christmas, but it'll take a lot longer, not getting worked on at all, right? Now that I've looked at it, I think it got ditched because the sleeve is too long and to shorten it with that pattern means taking out the sleeve, unraveling, and putting it back in. Won't that be fun.

I probably won't start on the red-and-brown sleeve until tomorrow. Hopefully I won't put it away and forget about it until 2009.


Remember the new tomb in the Valley of the Kings? (Well, I do.) They opened the last sarcophagus recently. No body, but lots of other cool stuff. There are also a good many storage jars still unopened, so there's still potential for discoveries to be made. Article here.

The baby is still refusing to crawl, but manages to scoot around on her bum everywhere she needs to go. When she gets up on her hands and knees, she doesn't crawl, she tries to put her feet under her and push up - to stand. I think she's going to skip straight to that. Then we'll really see some mayhem.

And this brings us to the cat. Who, with an entire futon to lay on, and a nice soft pillow, instead pulled the hand-knit tussah silk throw off the back and wedged herself onto a small corner of it. How do they know?? HOW? 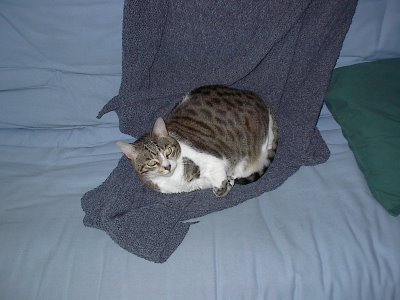