I've been asking myself this week, why in hell I insist on knitting doilies when they drive me absolutely batshit. I remember now. 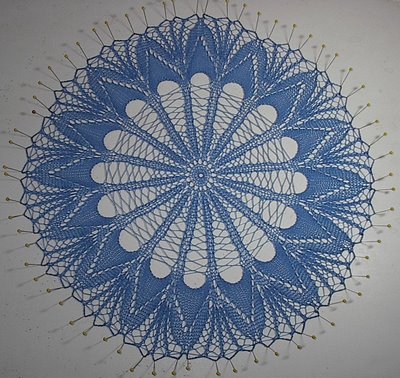 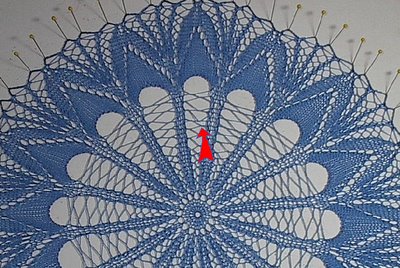 I'm not sure what kind of mistake that is, exactly. (Okay, obviously it's a loose thread, I just don't know how it got that way. Some kind of screwy yarnover, I imagine.) But, hell with it, it's done and going into the mail on Monday with the Deco Bag, to their new homes (different destinations). I've got a blue Project Spectrum deal done (it was on purpose, remember?), and I have suddenly realized that to finish all the Christmas knitting by the end of summer, I have to knit a sweater and two scarves per month. (Please stifle your hysterical laughter, it's distracting me from banging my head on my desk.)

Literally while I was blocking the damn doily, the mail arrived and this was in with all the bills: 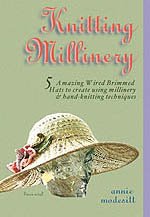 After a quick flip-through of this book, I now understand more about knitting hats (and just as importantly, blocking them) than I have after twenty years of looking at patterns. I've had this idea for a baby hat for winter that I might now know how to knit!

If you order this book, DO NOT ORDER IT FROM AMAZON. It took those jerks THREE MONTHS to get this book here. (When I lived in Hawaii, I was ordering titles even more obscure than this, and they'd have it to my house in a week. Ever since they started selling crap other than books, it's been a mess.) I ordered it March 10, and at the time, the shipping info said it shipped in two to four weeks. You can order it straight from Annie Modesitt herself, at her very own web site, here. And oh, lookie, she has a blog. Heh heh heh.

This pretty much concludes today's fiber festivities. From here it's all a sad, downhill path to grocery shopping and poopy diapers. (The husbeast has been working literally around the clock, fixing something submarinish for the Navy. When he is home, he's usually talking in his sleep about taking things apart and putting them together.) My other great fiber goal for the weekend is to knit a gauge swatch. Woo. Big excitement. But I've gotta get a jump on this month's sweater. Arg.

New yarn is supposed to get here Monday. Including the stuff to finish the Tomten. And knit some blue socks.
at 12:47 PM