Mud and weeds and stink bugs.

At this point, I don't know if I'm so fucked up because I'm messing with my main pain medication, or because I'm sick. Most likely a combination of the two, 'cause I've definitely got a sinus infection. So, you know, FUCK.

The big archeology news of the past week-ish, is this: 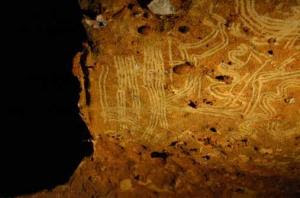 See the little lines, there? They're called flutings, and what they are is simply a spot where someone's run their fingers over some damp mud in a cave. Apparently they are found world wide, but the study that's been getting news is about a cave in France. (I don't know if France is REALLY the center of the world for cave art, or whether it just seems like that because they have been settled a looooong time and their countryside has been explored extensively.) The flutings in that picture there are possibly as old as 13,000 years.

See how they look like a kid did them? Ran their fingers through, did some doodling? That's because a kid REALLY DID DO IT. Scientists have done studies that make it possible for them to estimate the ages and genders of the people doing the flutings, and they've found that many of them were made by children! Also, the children have drawn not only on low walls, but up across high ceilings and very deep underground, so adults almost had to be helping them.

No one knows what exactly it means. And it's kind of nice that for once, the archeologists are actually admitting it. Some have admitted it COULD have a ritual purpose, but most of the spin on it seems to be saying it was little kids doodling, JUST LIKE THEY DO NOW.

Taking precise measurements, they can sometimes track on individual's work. They think the most prolific of the doodlers was a little girl, somewhere around age five. What this means is, 13,000 years ago, there was a little girl doing the exact same thing that MY little girl would do in a cave with muddy walls.

The mental image of a group of muddied-up children tumbling out of the cave after a day spent fooling around makes me smile. It's all so, well, NORMAL. Some things don't change.

Also, I've been reading this: 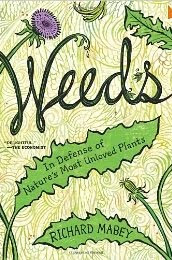 "Weeds", by Richard Mabey. Basically, a history of weeds. Both culturally (what do we consider a weed, and why?) and botanically (how they grow and what they're good for). He's a plant freak, and reading the book kind of reminds me of reading my own blog posts about plants. So if you like the stuff you've read here on leBlog, you'd enjoy this book. It's fairly new, so your library should have it, if you're unwilling to spend money for weeds. Gardeners, it will help you. Plus, hey, plants. Plants are cool.

All else is much the same. I finished the one sleeve and started the next; this would be the next KAL post, but I don't want to try to explain something clearly while I'm tired and full of snot. So that's coming tomorrow.

There is a stink bug in my living room. This displeases me greatly. But if Sekhmet eats it, I'll try to get photos. CHINA. COME AND GET YOUR BUGS AND TAKE THEM HOME.
at 7:52 PM

I'm glad they're someplace else other than my living room!

Hi I commented on your question to all about your progressive lenses and I forgot to tell the biggest hint to use them and that is what ever you want to see point your nose at it and your visual for the range should come into focus. Try it and see what happens only time to avoid this is when going down stairs make sure sure you are looking through your distance portion otherwise if you look through your reading or intermediate areas the stairs will appear closer and you can end up thinking they are closer than they really are. Good Luck

We have had an influx of those bugs in the last few years. They seem to be everywhere.

I love the image of muddy children playing. My girls were mud pie makers from the get go (in fact one of them got ringworm and the dr said it was because I let them play in the dirt). People don't change all that much.

This is the year of the sinus infection, or else it's horrendous allergies. Everyone seems to have one (maybe it's the new Thing To Do?).

And I think my definition of weed is a lot different than most people's. I happen to like dandelions, much to my neighbor-with-the-perfect-lawn's chagrin.

I always find the best history book recommendations on your blog. Booyah.

I love your archaeology news. And that piece is fucking AWESOME. I can imagine my kids doing it, too, because guess what? KIDS PLAY IN MUD.

My house is LITTERED with "little kid doodlings"-- I really love that idea too. Very cool:-)

Do stink bugs really stink? We have had a few hanging about but they haven't done any stinking. do you have squash them or is it an intermittent thing?

I loved that cave art article.

We don't have marmorated stink bugs, but we do have Western conifer seed bugs (http://bugguide.net/node/view/3393/bgimage), and they fly, buzzing like a wasp, and stink you if you poke at them, sort of a bitter-apple smell. The dogs won't touch 'em as they try to come in and hibernate.