I've been meaning to do this a while, and since I'm actually awake and coherent at the moment (no, I was not coherent for the Sumerian number system thing; that was drugged stream of consciousness. Be very, very afraid). 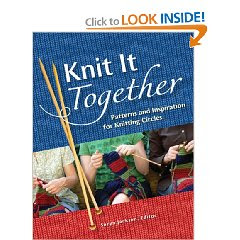 Knit it Together, by Suzyn Jackson. (For sale here.)

Full disclaimer: I was sent this book for free and asked to review it by the author and publicist. Given the rep my Vogue Knitting reviews have gotten around here, I'm pretty impressed by the request.

That said, it's a good book. It is not the kind of knitting book I normally buy, but it's a nice book, one I was glad to add to my library. I've already used it for reference, plotting a group project with a friend.

As you can probably figure out by the title, it is about knitting groups. How to organize one, how to keep one going, and what to do with one once you've got it. It starts off with a short history, which of course I always appreciate; this one specifically covers knitting groups, starting off with the guilds of the middle ages and working on through the informal groups that met during the world wars to knit for the troops, and the recent explosion of knitting around the world. From there it's a well-organized series of discussions about knitting as an educational experience (with discussion of Knitting Camp with Meg Swansen), as political movement, as charity.

Each section contains patterns by the author, designed to be knit by groups. While the rest of the book contains good, solid information, it's the patterns that really impress me, because it's not the same old usual stuff. The author went to some real effort to come up with new ideas. Among other things, there is a jacket knit in strips, an entrelac bag (each person knits on another square), some mosaic knitting (ditto), a really cute tree of life hanging that would be great for large religious groups, and some modular shawls and wraps that could easily be used as christening or prayer shawls for Big Events. There's even a baby mobile where each person knits a separate dangly bit and they're assembled. Clever, interesting stuff.

If you're looking for a book about knitting groups, or HAVE a knitting group you want to breathe more life into, I think you'd do well to have a look at this book. It's the nicest treatment of group knitting that I've ever seen. (And if you think I'm just saying that 'cause I got a free book, go read one of my VK reviews.)
at 6:20 PM

Quite a useful review! Now how do I get on that list for free knitting books? ;)

Hey, does this mean it'll have a quote from you on the cover? Cool:)